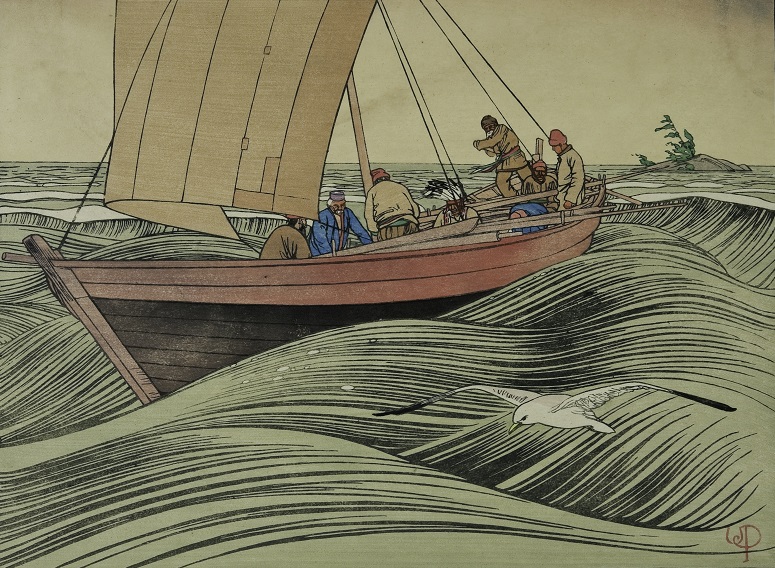 The lure of Japan is boundless, from the inspired art of ukiyo-e prints in the 19th century to the energy of anime and cosplay, from traditional textiles to Harujuku fashion, from tea ceremonies to futuristic technology.

In art, the term “Japonisme” (from the French) was coined by the French art critic Philippe Burty in 1872, to describe the influence of Japanese art on the fine and decorative arts, sculpture, architecture and the performing arts of Western culture. After the Japanese ports were reopened to trade with the West in 1853, European and American markets saw an influx of Japanese products, including silks, fans, pottery, lacquer and ukiyo-e prints which were initially used as packing paper in the cargo ships, but later much coveted as art.

The discovery of ukiyo-e prints and other Japanese crafts in the mid-1800s had an insurmountable effect on European art. The Japanese aesthetic, as seen on the woodcut prints, highlighted bold colours, a flat visual perspective and a high degree of stylization. All this accounted for a big departure from the academic art that was widely accepted up until then, thus appealing to the sensibilities of artists searching for fresh approaches to their work. Artists commonly associated with Impressionism – Claude Monet, Edouard Manet and Edgar Degas to name a few – and post-Impressionism – Vincent van Gogh, Henri de Toulouse-Lautrec – as well as other groups such as the Nabis, found inspiration in Japanese art and objects, incorporating them in their work. Their emulation of the Japanese aesthetic was sometimes subtle – by playing with visual effects – and other times overtly executed, copying Japanese themes or dressing their subject in Japanese clothing. As Van Gogh penned in a letter to his brother Theo on July 15th, 1888, “All my work is based to some extent on Japanese art.”

The study of Japonism, like its Chinese counterpart “Chinoiserie”, is nevertheless rife with paradoxes. The appeal of Far Eastern objects and culture may be seen as merely an appreciation for the exotic, but at the same time, artists adhering to the Japanese aesthetic found ways to assimilate the foreign sensibilities with their own cultural identities. The politics of the time also played an important part in the way Japan was viewed in the West, usually in comparison with China. In light of the numerous political problems with which China was faced in the mid to late 19th century, Japan basked in a rosier glow for Western observers of the era.

The influence of Japanese woodblock prints is the main theme of Walter J. Phillips’s own prints and watercolours. The AGGV exhibition Quiet Nature: The Woodblock Prints of Walter J. Phillips examines this Japonesque influence while setting the scene in landscapes that are undeniably Canadian, from the prairies of Winnipeg, over the Rocky Mountains and across to the West Coast. The previously obsolete practice of woodblock printing saw a revival in the early 20th century, but as an artist working mostly in isolation in Winnipeg, it is unlikely that Phillips jumped on the bandwagon, but discovered by himself “the beautiful simplicity of the technique of wood-working… with the aid of a weird and clumsy contrivance that represented my conception of the Japanese method of registration.” On a trip back to his birth-country of England in 1924, he was introduced to Yoshirigi Urushibara at his Chelsea studio in London. Through the help of the master of the colour print, Phillips learned how to size paper and the Japanese technique of registering it on the wood-block.

Phillips’s love of nature is deeply felt in his works, but unlike the grand landscapes in oil of many of his contemporaries, the soft hues of watercolour and colour prints give way to a gentler appreciation of nature.