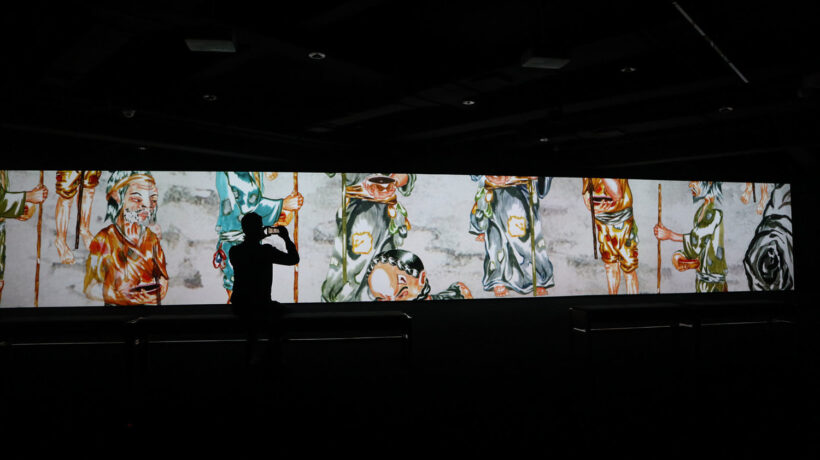 Vancouver-based artist Howie Tsui (Tsui Ho Yan / 徐浩恩) is currently in the process of installing his show, Retainers of Anarchy, at the AGGV. In anticipation of the opening, on June 12, Tsui has agreed to share with us a little bit more about his art practice in an e-interview.

This is our conversation…

Marina DiMaio: How about you start by briefly summarizing your practice for those who might not be familiar with your work, or with the Wuxia genre, and telling us a little bit about the role of narrative or storytelling in your practice?

Howie Tsui: I work in a variety of media to construct tense, fictive environments that subvert venerated art forms and narrative genres, often stemming from the Chinese literati class. I often employ a stylized form of derisive and exaggerated imagery as a way to satirize and disarm. The most notable branch of my practice involves the use of algorithmic animation sequences to raise questions around order, chaos and the potential of social harmony through self-organized societies. I’m interested in synthesizing diverging socio-cultural anxieties around superstition, trauma, surveillance and otherness through an oddball lens to advocate for diasporic experiences.

Wuxia or mouhap (in Cantonese) is a genre of martial arts fiction concerning the adventures of martial artists – often from lower social classes as they uphold chivalric ideals against oppressive forces amidst social turmoil. Banned in China (1920-1970) for supernatural themes and its potential for arousing anti-government sentiment, exiled practitioners proliferated the form in Hong Kong.

MD: I would be interested to hear you speak about the importance of materials in your practice. Much of your work incorporates a number of highly technical components. I’m fascinated by how this digital construction comes about. Do you typically start with a more immediate form of drawing, such as ink and pigment on paper, before translating your ideas into super fabricated multi-channel algorithmic animation sequences? If so, I’d also be curious to know how this process of translating drawing from one visual language to another informs the final work, or your overall practice.

HT: I am actually not very technically-versed, but have perhaps gained some know-how recently through various exploratory projects. I very much prefer working in a very old-fashioned brush or pencil to paper kind-of-way. It’s good for the soul. The process of digitizing these very analog, toothy and gritty works on paper, however, opens them up to the machinations and permutability offered by computers. I’ve rarely enjoyed creating something where I knew what the final result would be or that did not include voids in the process for potential surprises and failure. Relinquishing agency in how the work could come to be or behave, I think, encourages my engagement with it.

MD: Something that I think viewers will find particularly striking about Retainers of Anarchy is the scale! Although some of your drawings on paper, such as the Horror Fables, can be quite large, the scale of these drawings on paper still don’t compare to works like the 5-channel projection that will soon be installed in the Ker Gallery at the AGGV. Could you speak to the experience you are trying to create in some of your more recent video works? Was increasing the scale and adding layers of intricate audio all about creating a more immersive environment?

HT: The scale definitely creates a very immersive experience for the viewer. In ways, I want the viewer to be pulled into or consumed by the work – a vortex, a riptide, or quicksand. I want the viewer to become a complicit witness to the scenes. The scale combined with the camera movements and spatialized sound is also intended to produce disorientating and hypnotic encounters with the work.

MD: How do you know when a piece (or body of work) is finished?

HT: It varies from project to project. Some bodies of work tell me, “stick a fork in me”. Others tell me, “I’m far from resolved… keep grinding”.

MD: In speaking about your work, you have mentioned the influence of fantasy, fiction, legend and imagination, but you’ve also woven in references to real places, present-day social and political realities, and living histories and traditions in creating these visually complex scenes. Could you give readers a little more insight into these two different narrative building blocks? I.e. how much of your conceptualization of the imagery comes from current events? Or, how do you think of these ideas of resistance in relation to the world today? Is there a broader story that you want to tell? Perhaps about the antagonist?

HT: The fantastical scenes and lore extracted from these martial arts stories serve as a kind of cipher for present-day events. These events include acts of resistance and defiance against despotic regimes; which mirror common plots from martial arts narratives where heroes struggle against corrupt and oppressive authority figures.

MD: Who (or what) are your biggest influences? Is there another artist, a place you’ve lived or visited, a collection of books or comics, or perhaps even a daily practice that you would like to highlight as an essential inspiration for your work?

HT: I’m very much influenced by Hong Kong – the place, the people, the culture, the idea. In a more specific way, Hong Kong culture of the 70s, 80s and early 90s. I’m still digging into it because I feel as though I’ve been severed from it and I want to stitch my way back – an appendage to something unrecognizable.

Not sure how it directly informs my work but I’m currently obsessed with the practice of aquascaping.