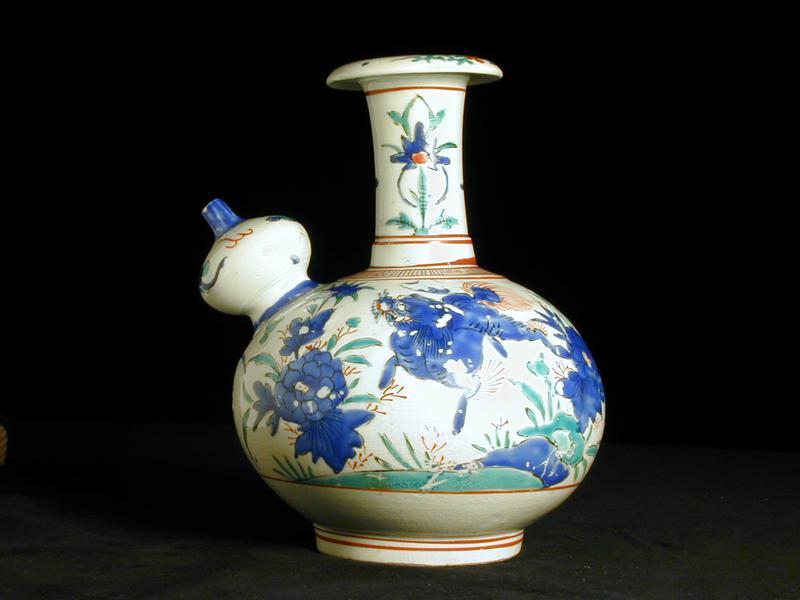 The global demand for Chinese blue and white porcelain during the late Ming dynasty stimulated production of similar wares in other parts of the world, including Japan. But more than just demand, the political situation in China during the late 16th – mid 17th century also played an important part in how ceramic production shifted within China and elsewhere.

The late Ming was a period of national disintegration in China, with weakened Imperial control and outbreaks of civil war which disrupted export trade and the porcelain industry at Jingdezhen. With the loss of Imperial patronage at the kilns (due to funds being diverted for military purposes), new markets were sought. The patronage of the Dutch and the Japanese lead quickly to a shift in style and type of wares being produced. Free from strict adherence to Imperial standards, the potters enjoyed a new-found freedom to experiment with new styles, shapes, forms and types of decoration, according to the tastes and demands of foreign markets.

The wares produced specifically for the Japanese market were almost exclusively used in the tea ceremony, and this consideration determined to only the choice of shape and decoration, but also quality of material and execution. Contrary to the exacting standards of the Chinese market, the Japanese placed considerable value on technical flaws in ceramics, seeing these imperfections to be imbued with character and therefore, enhanced the tea ceremony.

The types of wares made in China for the Japanese market include Kinrande, Ko-sometsuke and Shonzui.

Kinrande (literally “gold brocade”) came about in the late 16th century. As suggested by its name, the main form of decoration is a delicate gold design over iron-red enamel and sometimes with the addition of underglaze-blue and/or green enamel.

Ko-sometsuke is the broad term given to those wares exported to Japan during the Tianqi reign (1621-1627). Meaning “old blue and white”, they were named after the decorating style of such wares, but unlike Chinese blue and white, Ko-sometsuke wares are characterized by coarse potting, Japanese inspired shapes such as cylindrical teacups, and their simple and freely painted decorations – the antithesis of the ideal Chinese aesthetic of perfection and precision. These wares were favoured for the tea ceremony and the accompanying kaiseki meal.

Also originating from the blue and white genre are the Shonzui wares. Unlike Ko-sometsuke, the Shonzui tea ceremony wares were ordered and made to specifically high quality in all areas – painting, glaze, body and the quality of cobalt for the underglaze blue decoration. Shonzui pieces were made in eclectic shapes and innovative decorations were used.

The growing demand for tea wares inevitably stimulated production in Japan. The first Japanese blue and white porcelain was made in the early 17th century at the Arita kilns with help from Korean potters. The Arita wares are thicker, heavier and coarser than their Chinese counterparts and are similar to Chinese Ko-sometsuke. With the upheaval of transition from the Ming to the Qing dynasty in China during the early-mid 17th century, Chinese production was much reduced, providing a chance for Japan successfully replaced China as the supplier to global ceramics markets.

By the late 17th century, the Kakiemon style of Japanese blue and white emerged with distinctive Japanese characteristics, featuring underglaze blue painting and overglaze decoration in iron-red, coloured enamels, and gilding. The later works emphasize the delicacy of painting and the refinement of the white porcelain body. Kakiemon wares were exported to Europe and significantly influenced the decorative styles of European ceramics.