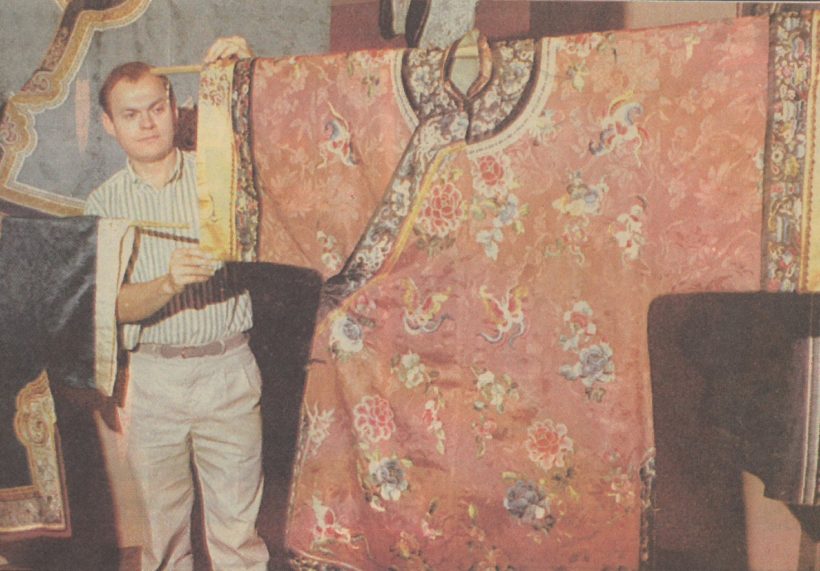 As Barry Till recently announced his retirement as the Curator of Asian Arts, AGGV staff had some burning questions about his 36-year tenure at the Gallery and his travels throughout Asia. Here’s the nitty gritty:

BT: My first choice for a career would have been to be an Egypt archaeologist, but growing up on the prairies as the son of a railway man there was not much chance of that happening, but there was a very good university in Saskatoon with a wonderful Far Eastern Studies department, which had great professors in the field of another great early civilization – China.

2) If you could keep just one item for yourself from the AGGV’s Asian Art Collection, what would that be?

BT:  I would probably like to keep a Chinese tomb figurine of a prancing horse from the Tang dynasty, 7th century.  This muscular horse is the epitome of grace and elegance of China’s golden age and belongs to the breed known as Ferghana horse (also known as the “blood sweating horse”), which played a major role in driving away the barbarians along China’s western border.  These pottery horses served as surrogates of the real horse for use of the deceased in the next life.

3) What’s the first dish that you order when you visit China?

BT:  Dumplings!  There is a restaurant in Xian that serves nearly 30 different types of filling.

4) What was your favourite art tour and why?

BT:  I have done a dozen or so fundraising Asian art tours for the Art Gallery.  All of them have been wonderful, but perhaps the one that was most stunning for me was the tour to India and Sri Lanka to see the Taj Mahal, the Buddhist and Hindu grottoes of Ajanta and Ellora and the ruins in Sri Lanka.  However, my single “favourite” art tour was in 1995 for an American Museum along the Silk Route from Uzbekistan and Kazakhstan passing by China’s Dunhuang’s 500 Buddhist caves, Xian’s terra cotta army and culminating with the grandiose Beijing, where I met my wife with our newly adopted Chinese daughter, Jasmine. The timing was perfect.

5) What’s the most exciting acquisition at the Gallery thus far?

BT: The most exciting Asian art acquisition for me was a large early 17th-century Japanese screen from Kyoto’s Nijo Castle, which was donated by Uno and Dianne Langmann of Vancouver in 1995.  The screen had once belonged to Frank Lloyd Wright, the famous American architect. When Uno acquired it, it was in ruinous condition and it took several attempts to have it restored.  Finally, in 2008 the National Research Institute for Cultural Properties in Tokyo restored and conserved it free of charge, giving us an extremely important artifact with much historical significance. If the screen could talk it would have many interesting stories of tell of palace intrigues.

6) What would you tell your twenty-something self?

BT: Never lose your enthusiasm for acquiring art. You will make mistakes and you must learn from that, and never give up.

7) What’s the wackiest piece someone wanted to donate?

BT:  This one is easy! A Chinese ceramic chamber pot in the shape of Sir Harry Parkes.  Parkes was a British diplomat,  who played a fairly large and significant role in the outbreak of the Second Opium War (1856-60) between Great Britain and China over opium trade, which was being forced upon China by the British.  Eventually Parkes returned to Britain and was knighted for his work in the Far East.  The Chinese felt he got away with no repercussions for this unjust war.  Some Chinese potters got their revenge by depicting him as a “piss-pot”.  We accepted this gift from Carol Potter Peckham of San Francisco, formerly from Vancouver Island.

8) As you reflect on your career, would you do anything differently?

BT:  Hindsight would be wonderful.  There are many things I would like to be able to do differently, but my life has been just one mad dash from one project to the next.  Perhaps I should have tried to have relaxed more and enjoy everyday life.  It has been a great life but I am exhausted and need a long break.

9) What’s the most astonishing art restoration that you’ve ever witnessed?

BT:  The portrait of a Chinese official, which was donated by the Menzies family, underwent a remarkable transformation.  When it arrived, it was an old “oil” painting that had been rolled up like a scroll and was suffering from paint loss and paint cracking everywhere.  A local restorer named Simone Vogel-Horridge did a wonderful job restoring it to its original magnificence and the funding for it restoration was provided by local Asian art collectors, Judith Patt and Paul Warner.

10) Why do you think Asian art continues to have relevance today?

BT: China, like Egypt, has an extremely long tradition of artistic masterpieces.  People enjoy the major works created by these two cultures.  Despite the beauty of Chinese ceramics and sculpture, Chinese scholars consider painting and calligraphy to be the only “true art”.  At the moment, China is producing some truly amazing contemporary artists but the general public still loves traditional painting.

11) What’s the sketchiest experience you’ve ever had in Asia?

BT:  Too many to enumerate. Probably the most sketchiest and dangerous experience was with a private tour in August 1988 in Burma (Myanmar) when the 8888 Uprising took place over government oppression and thousands of protesters were killed.  We had to leave the country quickly in the major chaos. Fortunately, the group had their own jet or it would have been a problem leaving the country.

Enjoy these clips from our archives highlighting some of Barry Till’s remarkable achievements throughout his career: