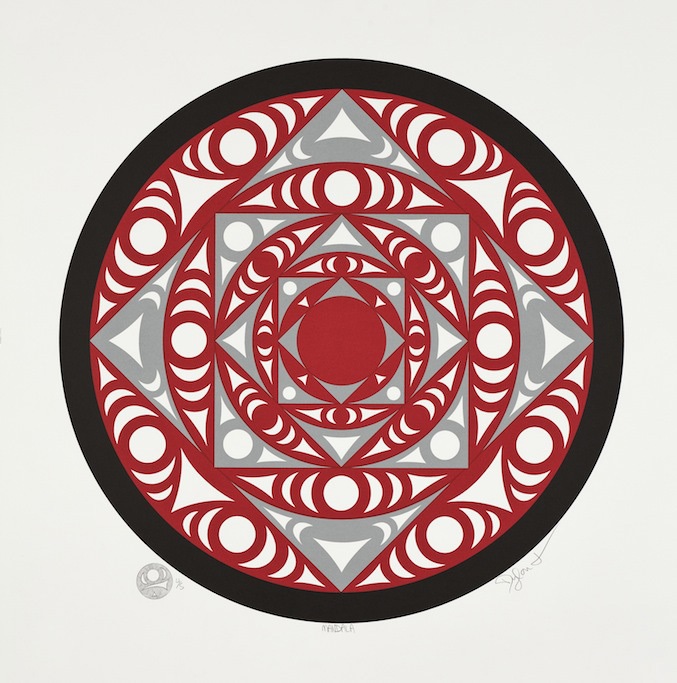 Dylan Thomas (Qwul’thilum) is a Coast Salish artist and member of the Lyackson First Nation of Valdes Island. Through his paternal lineage, he also has heritage from the Songhees and Squamish nations, and through his maternal lineage, he has heritage from the Snuneymuxw and Sto:lo nations. Dylan’s work has been deeply influenced by a lifelong passion for Northwest Coast art, as well as, Vajrayana Buddhist mandalas, Celtic knots, Islamic tessellations, and many other ancient geometric art traditions.

Dylan will participate as a panelist in a major artist-centered research convening at the end of October 2019 – the first component in Haema Sivanesan’s multifaceted research and exhibition project, In the Present Moment: Buddhism, Contemporary Art, and Social Practice.

In anticipation of the convening, Dylan has agreed to share with us a little bit more about his art practice.

This is our conversation…

Marina DiMaio: How about you start by briefly summarizing your practice for those who might not be familiar with your work, or with Coast Salish art, and telling us a little bit about the role of Buddhism in your practice?

Dylan Thomas: For most of my career as a Salish artist, my two main focuses were silver/gold jewelry, painting and silkscreen print editions, but over the past 4-5 years, I’ve expanded my art practice significantly to include larger-scale glass and metal pieces, as well as stone and wood carving. It was my print designs where Buddhism had its earliest influence on my work. Through my desire to learn about meditation, I quickly became interested in Buddhism and began practicing a bit with a local Zen sangha. As my interest deepened, I started reading about Buddhist history and especially art. I was particularly drawn to the Tibetan mandala art tradition (i.e. sand mandalas and thangka paintings) because the structure of these designs had some interesting parallels with Salish art, especially in the geometric techniques that were used. The multi-axis reflection symmetry and fractal scaling were techniques found on many Salish artifacts, such as carved spindle whorls, cedar basketry, and wool textiles. This led me to do my first Buddhist-inspired print called “Mandala” where I used both multi-axis reflection and fractal scaling. Since then, Buddhist images have continued to influence my work in many media, sometimes in obvious and sometimes in subtle ways.

DT: Initially I was only interested in meditation for the mental health benefits I heard about. When I was trying to learn how to meditate, I didn’t find many of the secular or New Age books very enjoyable or useful. But when I finally turned to Buddhist literature, I found it both inspiring and helpful. From there, I became more interested in Buddhism as a whole. I could see how Buddhist ethics, philosophy, history, (etc) harmonized with its meditation practices to create a coherent spiritual system. So rather than just stealing the meditation techniques, I thought it would be helpful to explore it in its entirety.

“Art operates on a much deeper level than rational thought, a level that I can only describe as spiritual”. Dylan Thomas

MD: I would be interested to hear how you start an artwork. For instance, when describing the inspiration for your piece, Pointing at the Moon (2016), you cite an ancient Buddhist metaphor found in the Surangama Sutra. Do the Sutras play a major role in your art practice, and in your conceptualization of the imagery?

DT: I wouldn’t say that the Sutra’s specifically play a major role in my art practice, but rather that whatever I’m obsessing over in a given life period will inevitably begin to work its way into my art. In this particular case, I found that quote quite profound and knew that I wanted to create a visual homage to it.

I also thought that there were parallels between the metaphor in its original spiritual context, and how people tend to observe art. I’ve found that many people (Northwest Coast art appreciators) are often so interested in the symbolism, mythology, and story behind a piece of art that they tend to overlook the most important (at least in my opinion) aspect of art: the aesthetics. So the Buddhist metaphor of a “finger pointing at the moon” applies to art appreciation as well.

MD: Do you think of art making as spiritual practice? Or, in your practice, is creative process a form of meditation?

DT: I’d certainly say yes to both. Back when spirituality was not a significant factor in my life, I remember wondering why art (whether music, painting, sculpture, or any other form) had this mysterious pleasurable effect on humanity throughout the ages. Because, when I thought about it through a purely rational lens, art almost seemed pointless – yet all across the world, people have dedicated countless hours towards creating objects or songs (etc), whose only purpose was to look or sound beautiful.

But as soon as I deepened my spiritual life a bit, I realized that the reason that art hadn’t made sense to me was because I was trying to understand it on an intellectual level. I now understand that art operates on a much deeper level than rational thought, a level that I can only describe as spiritual. I’ve many experiences of falling into a silent state of awe when observing art, and during those moments, it really doesn’t matter what function it serves or if “makes sense” intellectually.

MD: How do you hope the viewer will approach your work? Are the final pieces intended to function as tools or aids for meditation, like mandalas, in a more experiential capacity? Or, is your intention for the viewer to approach the work from a more conceptual frame work – questioning the role of cross-cultural art work, contemplating diverse histories and pre-historic notions of art, and engaging with branches within mathematics and geometry?

DT: My main goal is always to speak to the viewer on the level of aesthetics. If I am successful on that level, I do hope they will read the artist statement and that it might offer them some further inspiration into the subjects covered. Whether they look a bit further into Salish art, Buddhist philosophy, geometry, or anything else, I’d definitely feel great if I was able to open a few new doors for them aesthetically, intellectually, or spiritually. There is nothing more exciting in my life than discovering a previously unknown area of interest. And there are many artists who have opened those doors for me over the course of my life.

DT: Ultimately, yes – all of my work has an enormous range of influences from all over the world. Once I’ve studied a specific art form, those influences will continue to influence my art for the rest of my life in sometimes subtle and sometimes obvious ways. But “Mandala” (along with a few other pieces) were more like homages and much more deliberately cross-cultural.

I do spend quite a bit of time contemplating cross cultural art lately because I’m worried how extreme the conversation about cultural appropriation has become. While I think that plagiarizing another culture’s art is unethical, I also think that being inspired is completely ethical and actually desirable. And I’ve found that, in recent times, people haven’t taken the time to distinguish plagiarism from inspiration – and this is an important distinction.

Personally, I hope that my work will inspire other peoples work, Salish and non-Salish alike. So I think that through my own work, I hope to, in whatever little way, demonstrate the value of cross-cultural exchange and inspiration.

MD: You’ve talk about the influence of artists like M.C. Escher, Rande Cook, Susan Point, Don Yeomans, Seletze (Delmar Jonnie), Robert Davidson, and Art Thompson, on your practice. Are there particular artists working with Buddhist ideas who you are also influenced by?

DT: No actually, not that I’ve heard of. But Escher was deeply inspired by Islamic tessellation, Susan did a piece inspired by Maori art and Rande has a vast range of artistic influences and has done many works inspired by other cultures as well. So even though I haven’t heard of any of them working directly with Buddhist ideas or art, many of them have taken influence from cultures far outside their particular tradition.

MD: You completed formal apprenticeships under the late Seletze (Delmar Johnnie) and Rande Cook. Could you tell us a little bit about your experience studying art in this way? And, how aspects of that process might bare differences or similarities to the approach to artistic training we associate with westernized art-education institutions?

DT: With Rande, I worked in his shop for six months and he helped with many aspects of doing Northwest Coast art. I would watch him work and help him with whatever I could (which was not much at that point). I would work on projects in his shop and he would help me along the way (from the initial design all the way to finishing coat), and he would answer the endless questions I had. This was, by far, the most important training I ever received. Without his help, I can almost certainly say that I wound not be a professional artist today.

This is not what a typical apprenticeship would look like because usually the student would have more experience than I had. A properly prepared apprentice would be able to help the teacher by roughing out cravings or doing the easier aspects of painting, etc. But with my skills, I could only help him with grunt work. My work with Delmar was less formal and immersive. I would go to his shop once a week and work on some jewelry techniques such as soldering or stone setting.

So as you can see, this structure is very different from Western education, but probably some pretty close similarities to the way knowledge was passed down in Western civilizations before the industrial revolution, when a father blacksmiths or stonemason would pass on the family trade to their son.

DT: I’m excited for all of it, but I’m really excited for the panel with other artists. I’ve always had great experience with those kinds of conversations, and know I’ll learn a lot and be inspired by the experience.