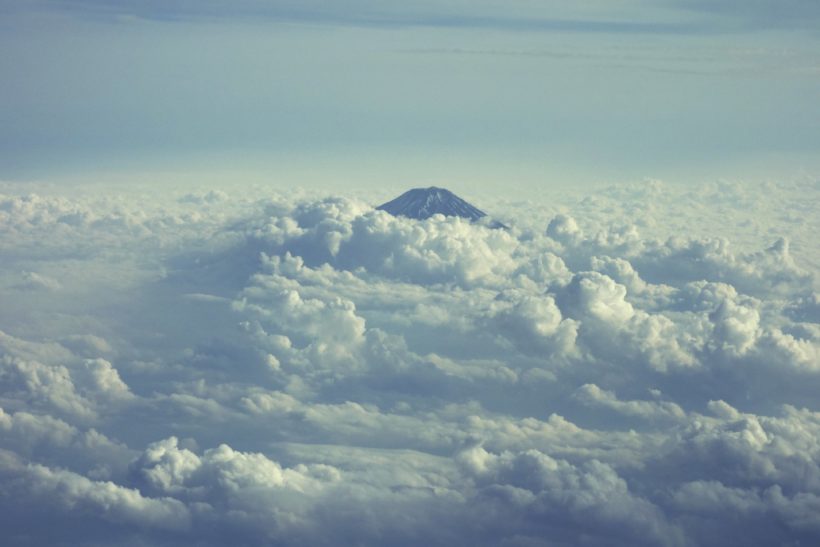 A well-known Japanese adage proffers that everyone should climb Mount Fuji once in their lifetime, but only a fool will climb it twice. Fujisan endures as an icon of Japan, and also an all-encompassing symbol of “the Orient”. The solitary stratovolcano, often snow-capped, rises 3,776 metres above villages, lakes and the sea, and is visible from countless vantage points, even from Tokyo on a clear day. It is no wonder that it is the site of pilgrimage and an inspiration to artists, poets, writers, botanists, geologists, adventurers and the pious.

The AGGV celebrates two separate, but related, exhibitions that memorialize Mount Fuji and its manifestations in the Japanese and non-Japanese aesthetic. Landscapes of Edo: Ukiyo-e Prints from the AGGV Collection (opening March 9) features coloured woodblock prints from the Edo period including several by leading artists such as Utagawa Hiroshige (1797-1858) and Katsushika Hokusai (1760-1849) and Fiona Tan: Ascent (opening February 16) looks at the significance of Mount Fuji in Japanese visual culture through Tan’s montage film and accompanying photo installation. These exhibitions are also to be shown in conjunction with  Quiet Nature; The Woodblock Prints of Walter J. Phillips (opening March 9) which considers the influence of Japanese printmakers on Phillips’ work and his important role in popularizing the Japanese woodcut tradition in Canada.

Mount Fuji’s spirituality is captured in numerous Japanese works of art and literature. Hokusai created two woodblock series in his later life, the Thirty-Six Views of Mount Fuji (c. 1830-32), and later One Hundred Views of Mount Fuji (c. 1834). Ando Hiroshige also produced a series of Mount Fuji prints, depicting the sacred mountain in differing seasons and weather conditions. The exhibition at the AGGV will include a rare complete set of Utagawa Hiroshige II’s (1826-1869) Forty-Eight Famous Views of Edo, alongside the AGGV’s extensive collection of Japanese prints. One will find several views of Mount Fuji in the exhibition. In each, the venerable mountain remains steadfast and unchanged, but its surrounds show an evolution, as industry and modernization in 19th-century Japan change the landscape from rural to urban.

The enduring influence of ukiyo-e prints in their representations of the landscape is conveyed when viewed alongside the other exhibitions of works by Walter J. Phillips and Fiona Tan. The popularity of ukiyo-e prints in the Western world in the mid-late 19th century, in a movement known as Japonism, led to Mount Fuji’s status as an icon of Japan to the outside world.

Phillips’ landscapes of the Canadian wilderness takes inspiration from the Japanese aesthetic found in ukiyo-e prints. In their flatness and the use of muted tones, he found a correlation between the Japanese and the Canadian landscape. In making Ascent, Tan selected and edited a vast number of photographs from the collection of the Izu Photo Museum in Japan, as well as photographs submitted to the artist by the general public. Through the film and photo installation, Tan considers the relationship between man and mountain, exploring Fujisan’s sacred character, its attraction as meisho (“famous place”) and as a landmark to be climbed and conquered.

This comparative approach offers an alternative interpretation to the linear art historical canon. By viewing the three exhibitions together, it is hoped that the presentation will be more relevant to the viewer in today’s world.