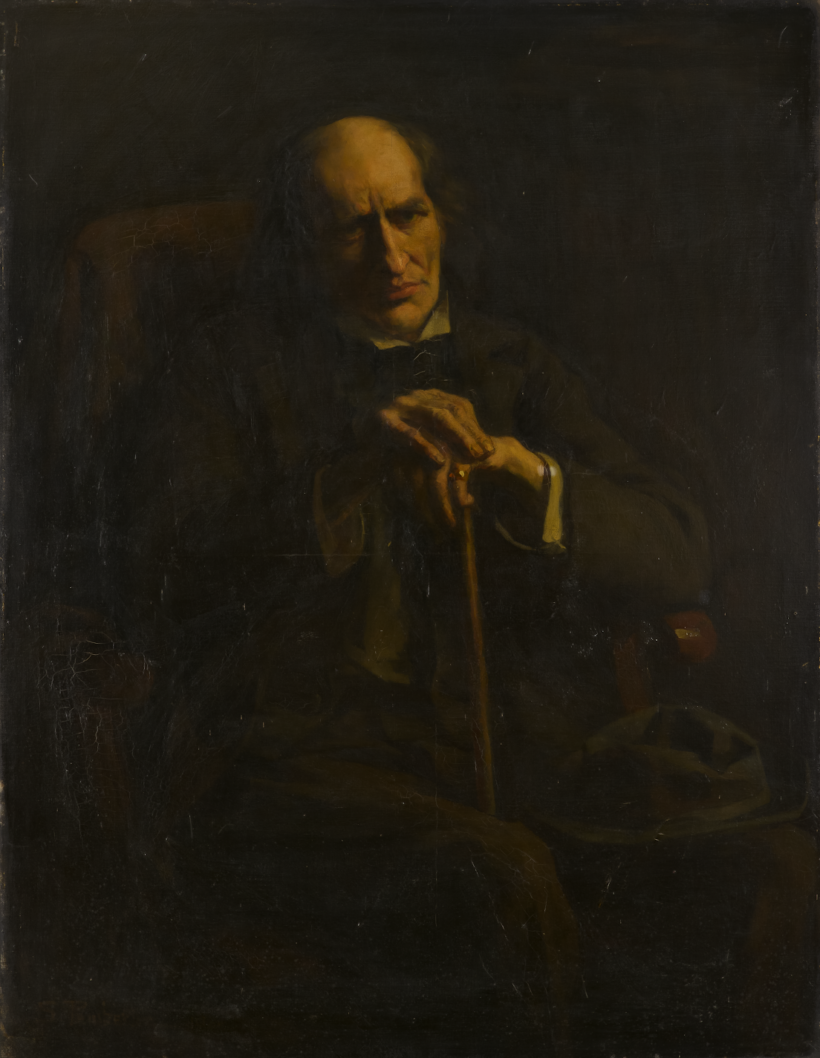 Details in the emblematic portrait of Bibi La Purée will be visible for the first time in decades.

Sophie Pemberton’s portrait of Bibi La Purée hasn’t been fit for exhibition in decades. There are few artworks that represent so much of an artist, but this one weaves a web of significance into one painting. The portrait — now deteriorated and obscured by smoke — hides a glimpse into the life of a young female artist breaking through barriers at the height of her career.

Sophie Pemberton (1869 – 1959) came from a founding family in Victoria. Her father was the Surveyor General for the colony of Vancouver Island. When he died, he specifically stipulated in his will that Sophie continue her pursuit of art. At the time women were expected to pursue such hobbies in a lady-like fashion — but to remain lady-like was to never bridge the divide between hobbyists and professionals.

Sophie studied in France at the Academie Julian. It was a progressive institution compared to the renowned L’École des Beaux-Arts for permitting women and men to study in the same class — a provocative policy for the study of nude models. But even it had a gender divide which was particularly clear when Sophie met Bibi la Purée for a portrait, and Mdme Julian insisted she act as a chaperone.

Archivist and historian Dr. Kathryn Bridge is currently writing a book on the life of Sophie Pemberton, and describes Bibi as “(..) a picturesque and well-known figure in the bohemian circles of Montmartre and the Latin Quarter. (…) Affable and eccentric and survived by shining shoes, stealing umbrellas and drinking absinthe.” His existence has been chronicled in the works of the influential creators of the era, including Pablo Picasso. Sophie later described him as “a dandy even in his rags.”

When Pemberton finished the portrait in 1900 it was hung in the Paris Salon. A review of the painting in Le Pays Latin indicated how well known the Bibi was at the time: “(…) We do not accept the idea of ​​a prize ring on the finger of such a wretch well known in the Latin Quarter. The artist would have done better to remove it.”

The painting won Pemberton a place among the international art scene and was exhibited at the Royal Academy of Art in London in 1904. Pemberton was striding right over the chasm separating lady-like hobbyists and professional artists. The subject’s significance in France and acclaim the painting won Pemberton internationally make it a vital part of her oeuvre. It was so important that she kept it in her personal collection her whole life; it travelled with her many times, and now that affection has accumulated into 120 years of wear and tear.

“[This is] Not going to be a dark and sombre painting anymore” – Dr. Kathryn Bridge

The painting was donated to the Art Gallery of Victoria (AGGV) from the artist’s estate, where it has remained ever since. The conservator’s notes indicate heavy decay from the painting’s original condition with an ill applied second layer of varnish—likely an attempt at conservation long ago—which has only served to obscure the painting beyond the already excessive smoke damage. The gilded frame has crumbled, the stretcher no longer provides tension, and much of the painting cannot be seen. But this is soon to change.

Thanks to the efforts of board members Lawrence Graham and Bob Coulter, the AGGV will be able to conduct the painting’s much-needed conservation work. Generous donors raised over $25,000 at the Art Auction in early March, and the painting will undergo a thorough cleaning, enlisting the assistance of Gilder Scott Browning to refurbish the original frame. A new stretcher will be built, cracks will be filled, and the canvas will be flattened and taut again. Significantly, the two layers of varnish applied to the painting will be removed and restored. The second layer of varnish is slightly whitish and discoloured, obscuring the portrait. A varnish removal test has demonstrated the stark difference between the current appearance of the painting and the colours underneath (photo below).

This essential conservation work is in keeping with the Gallery’s current priorities to highlight and improve the conditions of works by women and under recognized groups. It will turn this image from a dark and damaged painting into the brilliantly renewed image that once propelled Pemberton to international acclaim. The new treatment will beg the question: what does the Bibi la Purée actually look like? During the mysterious later years of Pemberton’s life, discoloured varnish, smoker’s tar, and actual punctures shrouded the details of the portrait. When they are removed, we will be able to see the work as the rest of the world did at the Paris Salon, painted by a professional female artist.