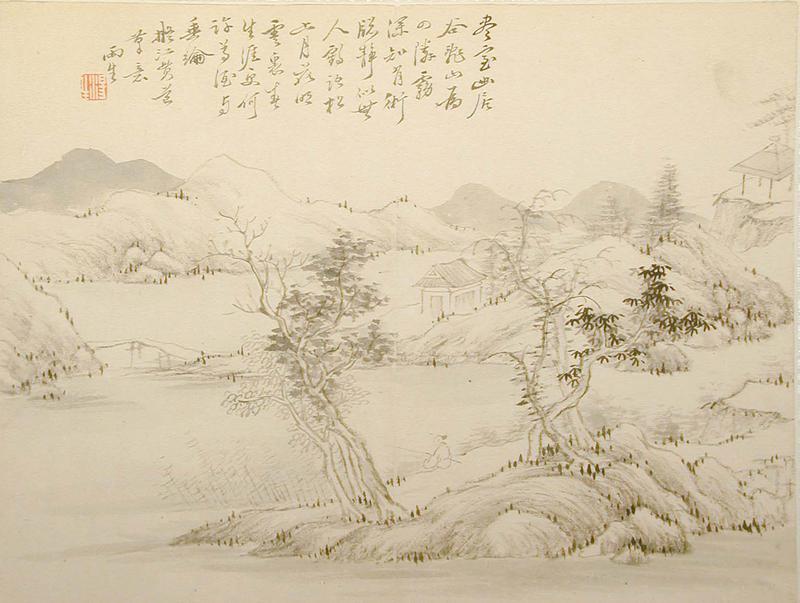 A Chinese landscape scroll painting in the classical literati tradition might be described as such: a solitude figure on horseback on a journey along a quiet riverbank surrounded by tall craggy mountains partly shrouded in mist. The tranquility and meditative atmosphere are reiterated in the poem inscribed in calligraphy along the right edge of the painting.

Unlike western painting, Chinese painting by the literati elite on paper or silk from the Song dynasty (960-1279) was not made for display, but for private consumption only or perhaps exchanged between individuals, very much like letters or poems. The practice of painting was a personal and meditative exercise, the essence of the work derived from the spontaneous expression of feelings. In particular, during this period in history, these feelings were those of escapism from the bureaucratic rat-race of scholar-officialdom, the main occupation of literati painters.

The subject-matter of misty mountains and tranquil lakes conveys a spirituality to which the literati aspired. Mountains were regarded as sacred places where the immortals lived. Their proximity to heaven also made them important. The depiction of towering rocky cliffs dotted with pine and bamboo, overlooking calm waters also served different symbolic purposes. Landscapes painted for the imperial court during the Song dynasty served as metaphors of a well-ordered state, of harmony and dignity. On the other hand, to many a literati painter disillusioned with life as a court official, landscape painting became a symbol of escape and sanctuary from the chaos of reality.

Through the similar tools of brush and ink, calligraphy and painting developed in tandem as the highest art forms in traditional Chinese visual culture. Expressive brushwork skills cultivated from calligraphic practice were used to depict mountains, rocks, trees. The literati painter eschewed the use of colour, preferring the monochromatic palette and abbreviated brushwork derived from calligraphy as a means of expressing their beliefs and intellectual character, rather than merely reproducing likeness from nature.

The tradition of the “three perfections” – painting, calligraphy and poetry – originated from the introduction of poetic inscriptions on these painted hanging scrolls and handscrolls. The poet, calligrapher and painter Su Shi (1036-1101) whose sobriquet was Su Dongpo, was a controversial political figure of his day and the main proponent of this approach to painting as a form of self-expression. He argued that painting could share the same values as poetry, thus establishing the concept of wenrenhua (“painting by literati”). The theories and ideals he set out about the virtues of spontaneous creativity and self-cultivation have endured in Chinese scholarly endeavours.

The concepts of Chinese scroll painting were set out clearly in the Song Dynasty period and have endured through the centuries. Paintings in this style continue to be made, emulating the masters of the earlier period. The outer world is a reflection on the inner world of the artist, a calming influence even during tumultuous times. The practice of ink painting is meditative, and the connoisseurship of it is also a form of spiritual escapism, bringing peaceful solitude as reflected in the tiny figures dotted around the awe-inspiring landscape backdrop.