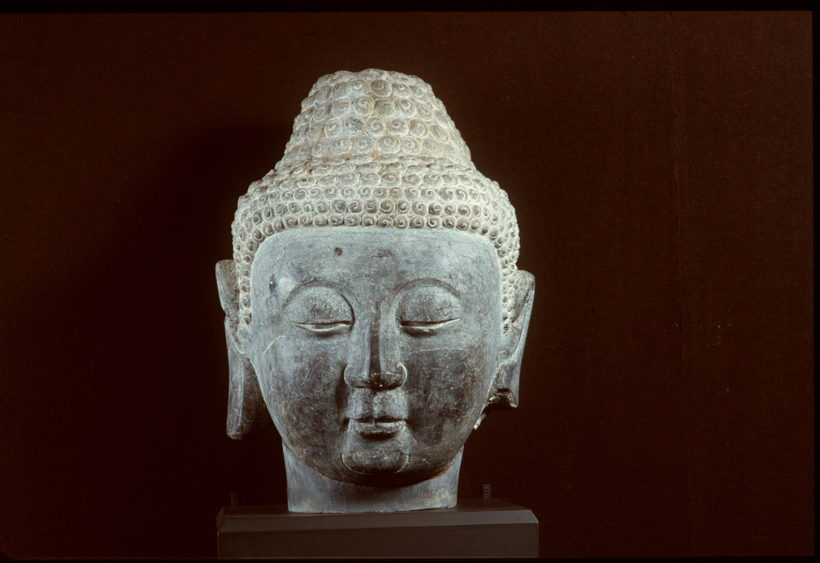 The Art Gallery of Greater Victoria has collected some of the finest pieces of Asian art over the last 65 years of its history.  Millennia: Asian Art through the Ages, presents over seventy masterworks from different time periods, cultures and media.

A recurring theme throughout the exhibition is religion in Asia, in particular, the branches of Buddhism as practiced in China, Japan, Korea, Tibet, Nepal, parts of South East Asia and India.

Image featured above: Large Buddha Head, Chinese, Tang dynasty (618-906) or later, Grey stone with blue pigment in hair and brown on neck. Given in memory of R.W. Finlayson by the Finlayson Family

Buddhism came to China from India around the third century CE, and with it, a new monumental art form was introduced. Early sculpture in stone, wood and bronze were based stylistically on images originating from Gandhara and Mathura in North Western India. By the fourth century, large-scale worship had prevailed, as seen from the cave chapels that were being constructed in Dunhuang at the time. The creating of Buddhist images was essential to the concept of salvation, and paintings and sculptures of Buddha proliferated. This large Buddha head (pictured above) is sculpted in a style prevalent during the Tang dynasty in China, with a sense of grandeur and a move towards realism. The Buddha has a serene look with eyes half-closed in peaceful contemplation. The fleshy cheeks and gentle smile are typical of Tang figures, and lend an expression of benevolence. The large size of the Buddha head is in direct relation to the grandeur of caves and temples being built at the time.

The collection holds three of these long handscrolls dated to 869 CE, which are dedicated to the parents of the Buddhist devotee who commissioned them. The scrolls came from the oasis of Dunhuang, a religious centre in northwest China along the major trade and pilgrim route linking China to South Asia and the West, known commonly as the Silk Route. Dunhuang is famed for the Mogao caves, a honeycomb of man-made caves in the cliff face, some cavernous and others mere niches. The caves contained hundreds of Buddhist statues and countless murals painted with Buddhist themes. The works here range in date from the fourth to the fourteenth centuries. Apart from religious imagery, the caves were a repository for thousands of manuscripts, both religious and secular in nature, and it is likely that these scrolls were among those discovered in a “library” of sorts in the caves. The British archaeologist Aurel Stein (1862-1943) was the first European to discover the library’s contents and acquired a large quantity of manuscripts, paintings, embroideries and other artefacts, which are mostly housed in the British Museum and the British Library in London.

Although lions are not native to China, they are often depicted in Chinese iconography as a pair of stone guards placed as sentry to protect the entrances of temples, palaces and tombs. Smaller versions can be found made of porcelain or cloisonné (the latter was used for this pair in the exhibition) and they would be placed at the entrance of the home or on an altar table. They are often associated with Buddhism (fo), hence they are referred to as fo lions.

This pair of cloisonné lions is among the finest types from this era and is especially well modeled with fearsome features, sharp fangs and thick curly manes. One plays with a brocade ball in its right front paw, while the other holds down a cub. Each lion surmounts an elaborate rectangular plinth richly decorated with scrolling lotuses (another Buddhist symbol).

This intricately embroidered formal robe was the type worn by nobles and officials of the Manchu Qing dynasty (1644-1911), and was commonly known as the “dragon robe” from the design of the five imperial dragons positioned at the chest, on the shoulders and on the skirt. The background of the robe represents a celestial map, with turbulent waves crashing onto rocks symbolic of earth and sea at the bottom, and wispy ruyi clouds representing the heavens towards the top.

Interspersed amidst the clouds are a multitude of Buddhist symbols, among them the Eight Buddhist Emblems (bajixiang), each decorated with flowing ribbons. The Emblems include: the Paired Fish representing conjugal happiness, fertility and protection; the Lotus representing purity and truth; the Vase, symbolic of eternal harmony and the nectar of immortality; the Wheel of Law, the expansion of Buddha’s teaching; the Canopy, royal grace; the Conch Shell, symbolic of majesty, felicitous journey and the voice of Buddha; the Umbrella, representing spiritual authority, reverence, purity; and the Eternal Knot, symbolic of eternity.

The items mentioned above are just some of the numerous examples of rare works on exhibit that tie into the theme of religion in Asia. Striking, and rich with ancient historical narratives, Millennia: Asian Art through the Ages shares a compelling and intricate story. Witness works that are centuries old and dive into the psyche of Asian culture.

Few people realize that the Art Gallery of Greater Victoria houses one of the most outstanding collections of Asian Art in North America. Millennia: Asian Art through the Ages features over seventy of the most stunning, interesting and rare examples from the collection. The works of art are mainly from China and Japan with other items from Korea, Tibet, India, Thailand, Vietnam and the Middle East. From China there is an astonishing group of old and modern paintings, ancient bronze items, ceramic treasures, magnificent textiles, rare amber and ivory objects. Japan is represented by old paintings including a large Kano screen, originally from Nijo castle in Kyoto, remarkable early Buddhist and literati paintings, a palanquin (sedan chair) with the crest of the Tokugawa shogunate, ceramic artifacts, and lacquer items. There are spectacular and important sculptures and thangkas from Tibet; impressive religious sculptures from India and Thailand; and ceramic treasures from Vietnam recovered from a sunken ship. Millennia is also a celebration of the generous and knowledgeable donors who have helped us build this remarkable collection, as well as an opportunity to look forward to the ongoing evolution of Asian Art at the Gallery.

Millennia: Asian Art through the Ages | September 17 2016 – April 2 2017 | Curated by Curator of Asian Art Barry Till | Centennial and Ker Galleries