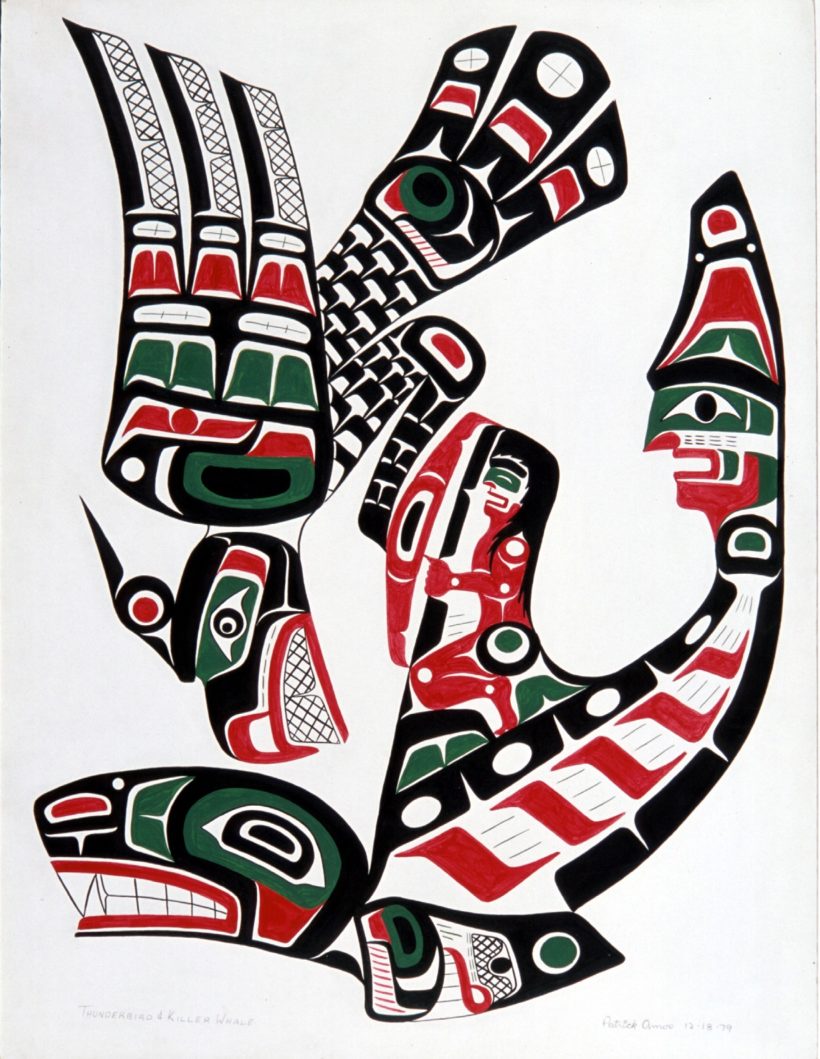 Geometry can be felt in the balance of a canoe prow and measured in each loop of a cedar bark basket. More prominently, it can be seen in the distinctive ornamentation painted upon sculptures and weavings alike.

– India Young, guest writer for the exhibition Beyond the Edges

The AGGV’s exhibition Beyond the Edges: Art & Geometry considers Canadian artists’ response to the modernist art theories of geometric art in the second half of the 20th century. Indigenous artists form an essential part of this exploration since their art histories have deep-rooted foundations in culturally specific geometries.

These specific forms gave rise to the term “formline”, coined by art historian Bill Holm in his seminal 1965 publication, Northwest Coast Indian Art: An Analysis of Form. He used the term to describe the fluid abstractions of Northern coastal designs, including the types of lines, symmetrical forms, and the ovoid, a shape particular to formline. The primary formline is considered the main continuous outline that creates the shape of the main subject matter or creature. This outline may curve and swell or restrict, making this one of the main characteristics of the principle of formline. The design components within the primary formline represent the details of body parts or may be purely decorative. These elements make up the secondary formline.

In Northwest Coast art, the ovoid and the “U” shape are the two main design elements or basic building blocks of the design system. The interior background of the formline ovoid is called the “negative” space, which may be the same colour as the background medium, for example, white if it is on white paper, or brown if the composition were on wood. Ovoids usually make up the main shape, such as the head or the body. When part of the primary formline, the “U” may be joined at the ends to make a continuous shape.

Colours also make up a considerable part of the formline system. Black is predominantly used for the primary formline, while other traditional colours include red, blue and green.

With the print medium, modern Indigenous artists were able to transfer their traditional art forms to silkscreen prints, making them more accessible to larger audiences. The rules of formline might at first appear to be restrictive, but the system is constantly changing and developing, as First Nations artists challenge themselves to embrace their traditions while expanding the repertoire. Pacific Northwest prints have become a vibrant aesthetic, as evident in the holdings in the AGGV.