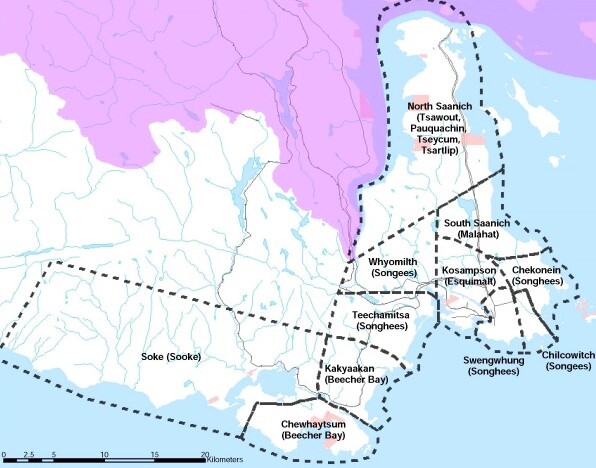 By Nicole Stanbridge, Curator of Engagement

The ocean that surrounds this region of southern Vancouver Island [i], the rivers, the lakes, the water we drink, and the land we live on, are all the traditional territories of the Coast Salish peoples. Victoria is located on the traditional unceded territory of the Lekwungen speaking peoples, the Esquimalt and Songhees First Nations. In 1850, James Douglas, an agent of the Crown, was appointed authority by the colonial office in London to establish a colony on Vancouver Island. The fourteen purchase agreements (Douglas Treaties or Vancouver Island Treaties) that Douglas completed with Vancouver Island Indigenous nations are transcribed on the Government of Canada website. (https://www.rcaanccirnac.gc.ca/eng/1100100029052/1581515763202)

These treaties are contentious and have been the subject of much discussion and research. Back in 2017, the Douglas Treaties were translated into the indigenous languages of SENĆOŦEN and Lekwungen. This was
part of a larger project with local nations and University of Victoria researchers (https://hcmc.uvic.ca/songheesconference/ ) to look into oral history and archives to better understand what took place at the time of the signing of these documents.  As told by the late WSÁNEĆ elder Dave (PENÁĆ) Elliott Sr. in his book Saltwater People, (http://www.islandstrust.bc.ca/media/341928/saltwater-people-1983-delliot-sr.pdf) their ancestors present at the signing of these agreements understood these as Peace Treaties, not purchase agreements. There were significant language barriers between the colonists and First Nations at that time that would have made it challenging for them to comprehend the precise intention of what is written in these documents. Therefore, to what extent the agreements would impact their rights to land and resources was not clearly communicated. Many of the names of the First Nations members on these documents are inaccurate or unknown to the families of the Teechamitsa, Kosampsom, Swengwhung, Chilcowitch, Whyomilth, Che-ko-nein, Ka-ky-aakan, Chewhaytsum, Sooke and Sooke Inlet, North and South Saanich, Queackar, Quakeolth, and
Saalequun peoples who are named in the Douglas Treaties.  In addition to this questionable treaty process, the colonists did not live up to what was promised to the First Nations in those agreements, that is “to keep enclosed
and village sites” to “hunt and fish as formerly”.
These failures to honour treaty rights can be seen throughout the colonial history of this country until this day as seen by the recent violence towards the members of the Mi’kmaq lobster fishery in Nova Scotia, “Mi’kma have inherent rights to practise their traditions and customs, including fishing. Under the Peace and Friendship Treaties signed in the 1700s, codified in the Constitution under Section 35 and reaffirmed by the Supreme Court,
Mi’kmaq have a right to harvest fish for food, social and ceremonial purposes and a right to fish for a moderate livelihood.”[ii] Those opposing the fishery were challenging what constitutes “to fish for a moderate livelihood”, and claiming conservation concerns which were unfounded. What this highlights is the racism inherent in the desire for control over resources and subsequent profit, in lieu of working with Indigenous communities to ensure livelihood, wellbeing and continuation of cultural practices. Closer to home we see the disregard for treaty rights and cultural practices with pipeline expansion, and “infrastructure projects” like Site C Dam.  The colonial project in this country has had a devastating impact on Indigenous cultural practices and ways of being. This connection to land, water and natural resources within Indigenous communities are the basis for cultural practices, language, governance, economies, food, shelter, and wellbeing.

Many movements and actions by Indigenous land defenders are taking place at any given time from the international movement of Idle No More (https://idlenomore.ca/) to Tiny House Warriors in Secwepemc Territory (http://www.tinyhousewarriors.com). Indigenous communities across the country are endlessly working to protect their land from destructive resource extraction, economic exploitation, and irreversible ecological harm. This should be of concern for all of us, the colonial framework that we live in is no longer sustainable. We need to be responsible to the land that supports us and to those who have been its stewards since time immemorial. The more we know about these treaties, the better equipped we are to take action, redress the damages caused by the colonial history of this country, and to support Indigenous communities. We all need to be invested in this urgent work; across cultures, sectors, and disciplines.

·         Te’mexw Treaty Association is a non-profit society formed of five Coast Salish Nations – Beecher Bay, Malahat, Snaw-Naw-As, Songhees and T’Sou-ke. The Te’mexw five member Nations joined to support one another and to work together under one organization to negotiate five Nation-specific modern treaties with the federal and provincial governments in the British Columbia treaty process. https://temexw.org/about/
·         Songhees Nation https://www.songheesnation.ca/governance/modern-treaty
·         The exhibition To Fish As Formerly: A Story of Straits Salish Resurgencerecently on display at the University of Victoria’s Legacy Gallery June 17 – November 21, 2020. Curated by XEMŦOLTW̱ Dr. Nicholas Claxton, UVic, School of Child and Youth and Katie Hughes, UVic Department of History, graduate student. https://www.uvic.ca/legacygalleries/exhibitions/index.php
·         To Fish As Formerly: W̱SÁNEĆ Nation Brings Reef Net Fishing Back After 100 Years, XEMŦOLTW̱ Dr. Nicholas Claxtonhttps://www.youtube.com/watch?v=vTQk1IR9ibc
·         First Nations & Indigenous Studies UBC – Indigenous Foundations, an information resource on key topics relating to the histories, politics, and cultures of the Aboriginal peoples of Canada. https://indigenousfoundations.arts.ubc.ca/land__rights/
·         Historical Timeline 1700s to the Present from the website of the Union of British Columbia Indian Chiefs https://www.ubcic.bc.ca/timeline
·         United Nations Declaration on the Rights of Indigenous Peoples https://www.un.org/esa/socdev/unpfii/documents/DRIPS_en.pdf
·         Mi’kmaw treaty rights, reconciliation and the ‘rule of law’ –Pam Palmater https://canadiandimension.com/articles/view/mikmaw-treaty-rights-reconciliation-and-the-rule-of-law

[i] The colonial name attributed to Vancouver Island came from Captain George Vancouver (22 June 1757 – 10 May 1798) a British officer of the Royal Navy known for his 1791–95 expedition, which covered North America’s northwestern Pacific Coast regions, including the coasts of what are now known as the American states of Alaska, Washington, and Oregon, as well as the Canadian province of British Columbia.
[ii] https://theconversation.com/nova-scotia-lobster-dispute-mikmaw-fishery-isnt-a-threat-to-conservation-say-scientists-148396