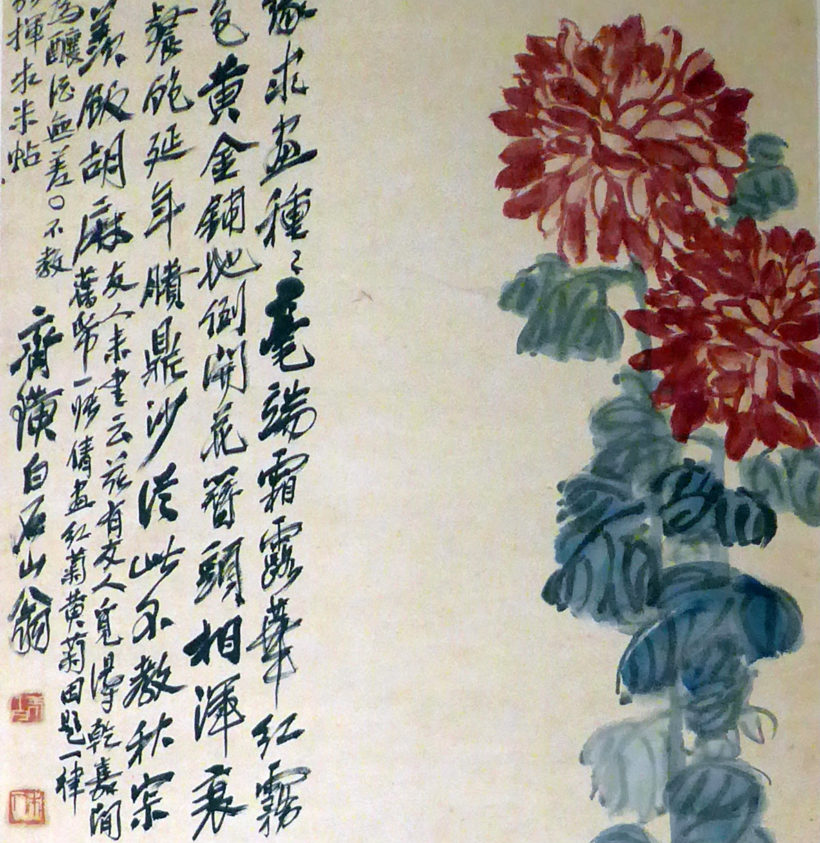 August in the Gallery kicked off with a well-attended Curator’s Tour led by Haema Sivanesan, curator of Karen Tam: With wings like clouds hung from the sky.

Welcoming the large group into the entrance of the exhibition, Haema described the work of artist Karen Tam as the re-creation of the Chinese-Canadian experience. Karen has long been interested in representations of Chinese communities, delving into how the Chinese in Canada are represented, but also how they themselves wished to be represented. The current exhibition, Haema explained, stemmed from the discovery, through the journals of Emily Carr, of an unknown Chinese artist Lee Nam working in Victoria’s Chinatown.

The first painting hung in the exhibition is a small Chinese ink painting of chickens, found in the BC Archives where Karen had spent a considerable amount of time researching about Lee Nam and other Chinese Canadian artists. Archival records interestingly attribute the painting to Lee Nam or Emily Carr. If the painting were indeed by Lee Nam, it would be considered a typical rendition of a popular motif in traditional Chinese ink painting. If instead, the work were painted by the hand of Emily Carr, it is a big departure from her usual painting style, thereby suggesting that the painting could have been an exercise in a new and different genre for her.

The next part of the exhibition is hung with a multitude of ink paintings of chickens hung from the ceiling. Haema explained that Karen Tam painted 200 or so chicken paintings as a way to get into Lee Nam’s mindset. The main part of the installation consists of the artist’s studio, with a desk laden with the Chinese artist’s materials and walls hung with scroll paintings. The various components of the display were gathered from the AGGV’s collection, from thrift stores and websites, as well as loans from Chinese Canadian artists. Haema urged attendees of the tour to consider if Karen Tam’s representation was accurate. She also pointed out the row of ink paintings by Karen’s collaborator Lui Luk Chun from Montreal. At first glance, the paintings appear to be typical “sanshui” (‘mountains and water’) landscapes of China. However, on closer inspection, the mountains and lakes are distinctly British Columbian, as noted by one of the visitors on the tour.

Also included in the exhibition is Qi Baishi’s Chrysanthemums (pictured above). Qi is considered one of the most influential artists in Chinese art history. It is, therefore, unusual to find a Qi Baishi painting hung as part of an installation among other ‘found’ objects, in a way that plays down the importance of such a well-known artist.

Haema’s tour concluded in the section of the installation called the Flying Cormorant Studio. On the table, rice paper and Chinese ink are set up to allow visitors to try their hand at ink painting. On the television screen is a video of artist Lui Luk Chun demonstrating ink painting techniques. As several participants set out preparing the materials for painting, Haema emphasized the importance of experiencing the exhibition first-hand through the re-creation of the artist’s studio, and what it was like to be a Chinese artist in Victoria.