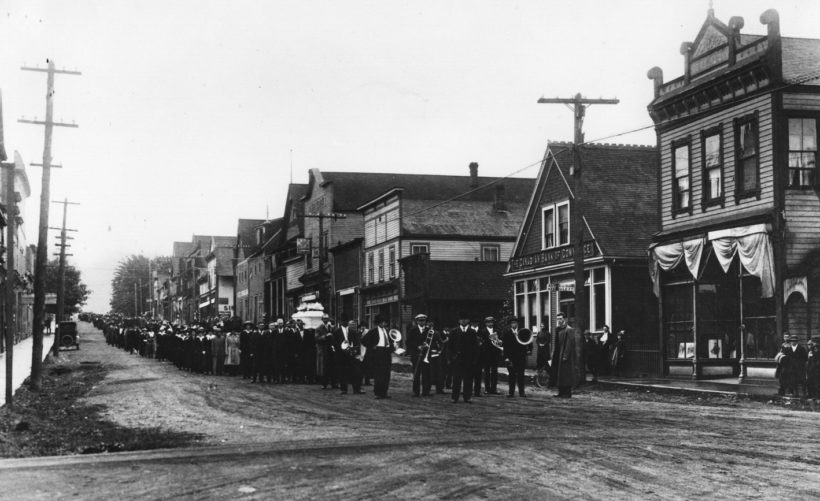 Stephen Topfer is more regularly known as the AGGV’s Manager of Collections. In an article from our March issue of the emagazine, he brought us on a behind-the-scenes look at his department in The AGGV Art Vault. With his background in photography and a BA in History, Stephen is also the curator of Mirror With Memory. On his Curator’s Tour on July 4, he revealed that the basis of this exhibition stemmed from his grad research into the documentation of Japanese Canadians through the photographic lenses of the Hayashi/Kitamura/Matsubuchi photo studio in Cumberland BC between 1912 and 1942.

Senjiro Hayashi (1880-1935) established his studio in Cumberland on Vancouver Island two years after arriving in BC from Japan. At the time, photography was still an exotic and novel activity, especially on the west coast of Canada. In the early 20th century, Cumberland was home to a diverse community employed in the most part by Robert Dunsmuir’s coal-mining company. With a large population of Japanese (and Chinese) immigrants, a unique community was formed by design and purpose, and Stephen was curious to learn more.

When asked by a visitor about what surprised him the most when he first saw the photographs from the Cumberland Museum, Stephen replied it was how affluent and well put together the portrait sitters looked. Many of the photographs on exhibit are studio portraiture, with the subjects dressed in their Sunday best, formally posed with props from the studio. These portrayals challenged the usual preconceptions about Asian immigrants to Canada and spurred Stephen’s interest to find out more about them. The unique quality of each portrait indicates that they were staged with thoughtful consideration for the sitters’ individuality.

Other photographs documented the everyday life of this thriving and hardworking community of immigrants adapting to life in British Columbia. Much of this was made possible with the use of a lightweight field camera, as displayed in the AGGV. Hayashi’s field camera was used to capture the funeral of Ginger Goodwin, a migrant coal miner turned workers’ rights activist, who was killed in 1918 (pictured above). Also of note in the exhibition is the large format, stand-mounted camera that would have been the type first used in Hayashi’s studio.

The Curator’s tour wrapped up with Stephen bringing our attention to the identification card on display. He found it bittersweet and ironic that the final job Hayashi’s photo studio was assigned before its eventual closing was the photography of individuals for their government-issued ID cards, as part of the War Measures Act. While the Japanese Canadians of Cumberland came to form a significant portion of the community, contributing to the development of schools, businesses and other aspects of the community, the years between the World Wars brought racial tension to the area. In 1942, 20,000 Japanese Canadians were stripped of their properties and liberty, and forced into internment camps in the Interior of BC. The restrictions were not lifted until 1949, four years after the Second World War had ended.