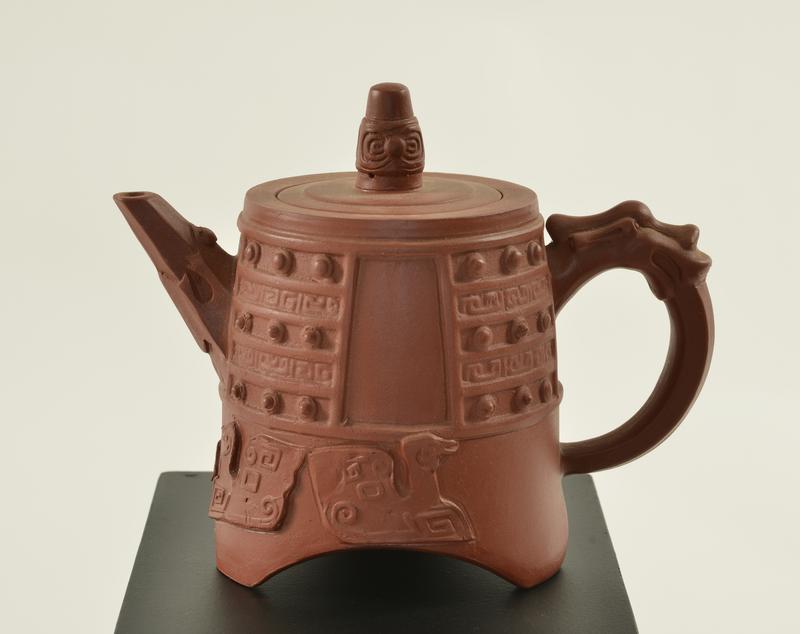 1. Yixing wares are so called after the Yixing kilns in Jiangsu province in China, for which the region is famous. The brown and red stonewares are known as zisha (‘purple sand’) in Chinese.

2. The hills in the south-east of Yixing provide the source of the clay that comes in purple, orangey-red and buff. The clays were used singly, as well as mixed together, which is why there is such a range of colours in these wares.

3. Yixing wares, as we know them today, were likely made from the Song or early Ming dynasty. The earliest datable piece is a teapot recovered from the Nanjing tomb of the eunuch Wu Jing who was interred in 1533.

4. The Yixing stoneware material is known for enhancing the taste and aroma of tea, which is why they were almost exclusively made in shapes for tea service. The maturation process also means that the teapots were never washed, so that the flavours could develop over time.

5. The base of Yixing teapots often bear the signature or seal mark of the maker, some of whom became famous enough for their signatures to be faked in their lifetime. The most famous Ming-dynasty maker was Shi Dabin, while Chen Mingyuan was most renown in the Qing dynasty. Chen was the first to apply seals to his teapots.

6. Apart from tea ware, Yixing stoneware was also made into items for the scholar’s desk, such as brush-rests, water droppers, ink boxes and brushpots. As Jiangsu was known for its literati culture from the Song dynasty, it is unsurprising that Yixing stoneware was used to make literati objects as well.

7. Yixing wares were mostly acquired by scholar-collectors who recorded their acquisitions, wrote treatises and made mention of maker’s names in their literary records, thereby allowing a chronology of potters to be established and studied.

8. From the Qing dynasty onwards, poems were found to be inscribed on teapots, often composed by the potters themselves.

9. Qing dynasty Yixing stoneware were also created into small naturalistic objects, such as fruit, vegetable, nuts and seeds. These were made for decoration.

10. The decoration on early Yixing wares relied on the shape, colours and textures of the clay, but during the mid Qing dynasty, a trend for painted Yixing wares emerged with brightly coloured enamel decoration painted directly on to the body without a layer of glaze between the clay body and the paint.

Recent acquisitions of Yixing teaware are currently on view in the Graham Gallery.