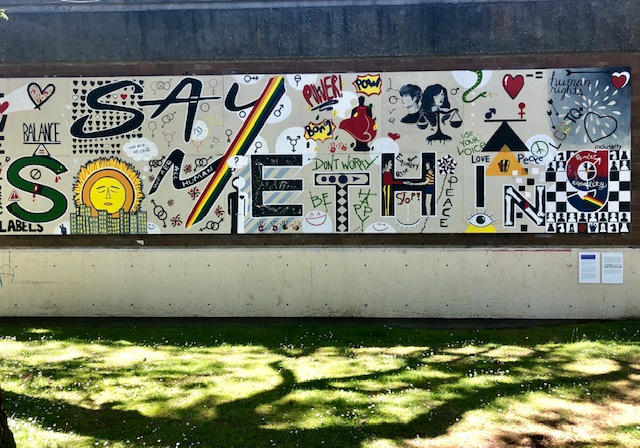 1. A mural describes any piece of two-dimensional art that has been painted or applied directly to a wall, ceiling or any permanent surface. The muralist also takes into consideration the architectural elements of the building onto which the painting is attached.

2. Many methods of mural application are known since murals have existed for many millennia and across all cultures. The main methods are fresco, fresco–secco and mezzo-fresco. A fresco painting is made when the pigment is applied to plaster, the chemical reaction between the two resulting in the pigment being fixed into the plaster as it dries. As the name implies, a fresco-secco mural is painted directly on a drywall. It requires a binding agent such as egg tempera. In between the two is mezzo-fresco where the painting is done on nearly-dry plaster.

3. Some of the earliest murals include pre-historic cave paintings such as those in the Chauvet Caves in Ardeche, France, dating to about 30,000 B.C. Early cave paintings are also found throughout the world, from Australia to China, Egypt and North America.

4. Religious subjects were a common theme in early murals. The most famous murals would be the frescoes by Michelangelo on the ceiling of the Sistine Chapel in the Vatican City.

5. In the early 20th century, murals were often associated with the art movement of Mexican muralism, led by Diego Rivera in the 1930s. The murals were politically charged aimed at reunifying Mexico under the post-revolution government.

6. Political propaganda plays a significant role in the purpose of the mural. Similarly, political statements which are anti-establishment in character may be embodied in murals.

7. Murals also include graffiti and street art, again some which are political and others, apolitical. Famous graffiti artists who have transcended from urban wall paintings to working on private commissions include Keith Haring, Shepard Fairey and the anonymous British street artist Banksy.

8. In recent times, mural art has played a significant role in public engagement projects in cities around the world, with artists and the local community collaborating for a cause. For example, one of the key initiatives of the Mural Arts Program in Philadelphia is the Porch Light Program to promote health and wellness in the city, by organizing participatory mural making where people with and without health challenges collaborate for a shared purpose.

9. The trompe l’oeil effect is particularly effective on murals and is, therefore, a popular aesthetic style. Meaning “to deceive the eye”, the effect is an optical illusion, in this case using realistic imagery alongside the comparison of the actual architecture around the mural.

10. Murals don’t only exist in the public domain. It is a trend in interior design that has been around for centuries. Faux architectural features painted onto interior walls saw a revival in the 1980s and 90s, often depicting an idyllic past, with the effect of opening up space as city-dwellers transitioned into smaller homes.

Feature image: Mural by the students of Spectrum Community School and mentor artist, Lydia Beauregard, as part of New Extreme, 2019.