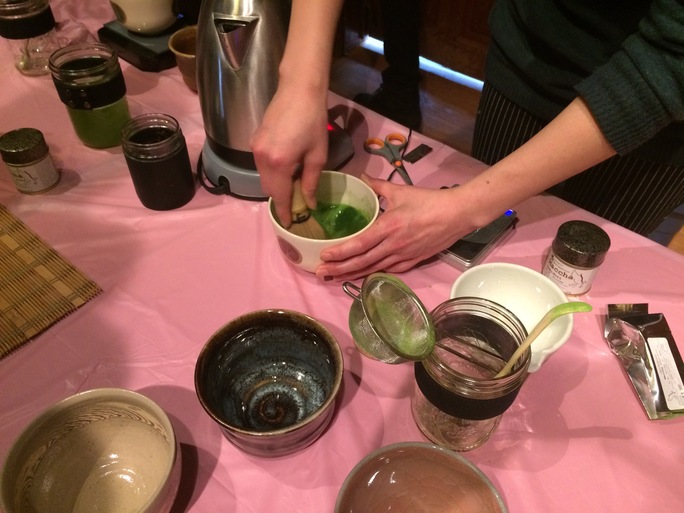 As the boulevards surrounding the Art Gallery of Greater Victoria burst into a cloud of pink and white blooms, we ushered in Spring with our inaugural Cherry Blossom Festival during the first week of April. Celebrations at the Gallery kicked off with an evening of poetry reading, followed by an afternoon’s family event that brought together our local communities to embrace the season.

Pictured above: Tea-makers from Jaga Silk demonstrating the art of maccha tea-making

A Pavilion of Blossoms drew inspiration from both the season and the Asian artworks in the Gallery’s outstanding collection. Well-known poets from Victoria were invited to respond to the artworks with new and original poetic works. Ekphrastic poetry is a time-honoured tradition that connects the visual arts and rhetorical exercise. Just as art has inspired poetry, so too has poetry inspired art. In this case, art acts as a portal to the poet’s imagination.

Displayed at the front of the room was a showcase of Japanese prints and items of netsuke, small objects or toggles finely sculpted from ivory. The poetry reading began with the City of Victoria’s Youth Poet Laureate Maita Cienska who put her words to music, in response to one of the small ivory figures. With her acoustic guitar, Maita filled the room with her stirring melody, setting the tone for the rest of the evening.

Unfortunately, Poet Laureate Yvonne Blomer was not able to attend at the last minute. Her proxy, Anita Lahey, read her poem which responded to the painting of a pagoda. Written in three parts, the poem is based on the Japanese theme of “Natsukashii” which refers to feelings of nostalgia for the past, or for an idealised past that could have been. In contrast, Patrick Lane’s offering entitled “Chuck Berry and Cherry Blossoms” was a light-hearted love poem that was inspired by a small piece of Japanese rice paper painted with cherry blossom and inscribed with a poetic calligraphy. The poetry reading continued with Jeff Tanaka, Terry Ann Carter, Sidney Bending and Alana Sayers.

Saturday’s Cherry Blossom Festival saw a huge turn-out. The AGGV’s lobby, galleries, and Spencer Mansion were filled with visitors of all ages enjoying the camaraderie and the myriad of activities on offer. The festival began with a welcome speech by Yukari Peerless of the Victoria Nikkei Cultural Society and an introduction to the Cherry Blossom Festival in Japan by Hitomi Harama of Ume Silk Kimono Couturier. This was followed by Haiku Arbutus president, poet Terry Ann Carter, reading tanka, the poetry celebrating the arrival of spring.

It was standing room only at the Spencer Mansion when the choir from the Victoria Japanese Heritage Language School Society sang three songs. The first two were about Sakura and the celebration of new beginnings. The third song, “Hana Ha Saku”, was performed in remembrance of the great earthquake in Japan in 2011 and in support of Victoria’s sister city, Morioka, which was greatly affected by the disaster. This was followed by a beautiful performance by Satomi Edwards on the koto, a 13-stringed horizontal Japanese harp.

Meanwhile, in the gallery spaces, adults and children alike immersed themselves in art activities such as making buttons and potato-printing Sakura blossoms which were then cut out to create a “forest” installation. Keiko Alkire was on hand to demonstrate and teach visitors the art of shodo (calligraphy). Representatives of Haiku Arbutus, including poets Terry Ann Carter and Sidney Bending, were also present to facilitate the activity of Haiku writing. These short, yet, insightful, poems were inscribed on pink blossom-shaped sheets of paper and then hung up as mobiles or scattered on the floor simulating petals cascading from the cherry blossom mobiles.

Another Japanese tradition was experienced in another room of the Gallery, where bilingual storyteller, Rebecca Kool, had set up her Kamishibai theatre in front of a group of eager children, many of whom were members of the Japanese Society choir. Narrating her story of “Fly-Catcher Boy”, Kool set up cards from the story, beautifully illustrated in Japanese comic-book manga style, and displayed on her miniature wooden stage, as was traditionally used for many centuries in Japan.

Throughout the festival, visitors were treated to tea by Silk Road Tea and Jaga Silk. Facilitators from Jaga Silk demonstrated the traditional methods of preparing maccha tea, vigorously whisking the green tea in Japanese ceramic tea bowls, and showing guests how to enjoy the tea.

It had been raining most of Saturday morning, but the sun came out just in time for the afternoon guided walks led by Gordon and Ann-Lee Switzer, to admire the cherry blossoms beautifying Moss Street. Both Gordon and Ann-Lee are local historians and writers with an interest in the Japanese Canadian experience. During the walks, they told the story and origins of the cherry blossom trees in Victoria.

The cherry blossom, or Sakura in Japanese, made its first appearance in Victoria thanks to the generosity of the Japanese community in 1937. That same year also marked the 75th anniversary of Victoria’s founding, and to celebrate the jubilee, parades with floats were planned by the city. The vibrant floats entered by the Japanese community were created with Sakura as its theme and easily won first prize in their categories. The Japanese Association donated its winnings to the city for the purchase of cherry blossom trees to beautify the parks and sidewalks of Victoria. In his 1938 annual report to the City Council, William Herbert Warren, Parks Superintendent 1930-1970, predicted “… our flowering boulevards will draw worldwide attention as a tourist attraction and as a drawing card for new residents.”

Sadly, the donors did not get to enjoy the splendour of their gift, as the entire Japanese Canadian community were sent into exile in 1942, never to return. But the plum and cherry trees endure as symbols of the early Japanese community’s legacy. Warren planned such that each street was lined with all the same variety of Sakura, giving a stunning display all at once. In this way, the different varieties bloomed in succession between February and May in different parts of the city, thus creating a wonderful spectacle unique to Victoria.