Listener in Residence: Phoning Seniors Together 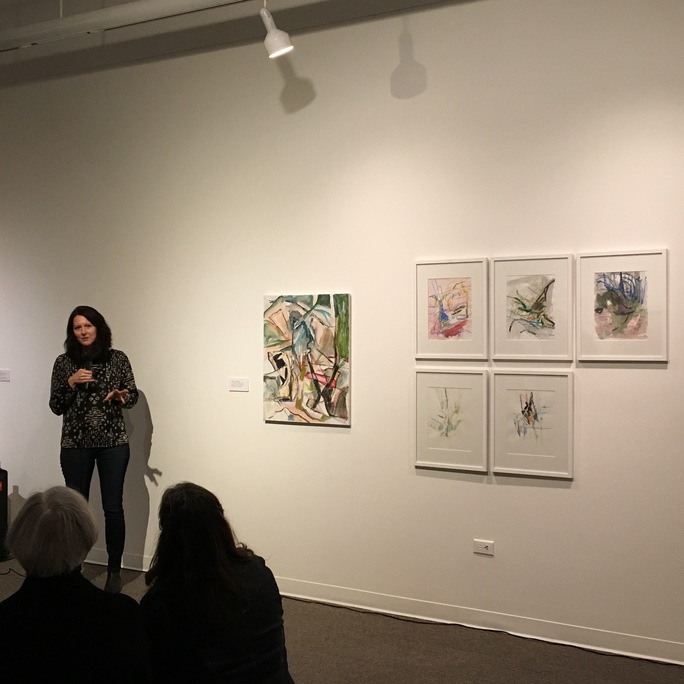 The artists – Angela Teng, Shelley Penfold (featured above) and the Bomford family comprising father Jim and sons Cedric and Nathan – started the January 14 event by autographing exhibition catalogues prominently displayed at the Gallery’s front foyer. The introduction in the catalogue sets the tone of the artist’s tour, by posing questions that came up throughout the dialogue among the artists, the curators – Haema Sivanesan and Nicole Stanbridge – and the twenty or so participants who filled with galleries.

Can the manual process of “making” be equated with the intellectual process of “thinking”? What is the relationship between body and mind, activity and contemplation, craft, and concept in the practice of art? Can aptitude and familiarity with materials be considered a form of information gathering?  Questions like these set the tone for the afternoon’s informative session as the artists discussed how they work, what inspires them and how they hoped their art might be viewed.

A predominant aspect of the art-making process that was cited by all the artists was that of negotiation, whether it was negotiating with past experiences, with materials, with ideology, or negotiating with other individuals during the creative and creating processes.

Shelley Penfold’s abstract paintings start out as plein air sketches, several of which are included in the exhibition. Painting or drawing in the outside environment is an essential part of her practice, as she considers the research to be an extension of the self. This methodology helps her gather multi-sensory information, from which she integrates research with practice in the studio, and as Penfold says, “(Preparatory sketching) helps me as an artist to keep moving forward all the time”.  She describes her studio practice as experimental and chance-based, consisting of her reaction to the materials and putting something new on the canvas, while using the experience of being outside in nature and translating that into something abstract. She affirms that “elements of the natural world reflect the inner world, and that’s why working in nature is so important. It creates a connection to the consciousness.”

A member of the audience asks, “As you are working in nature, do you consider these paintings landscapes or abstractions?”, to which Penfold replies that she considers them landscapes, as plein air work is always about landscapes. After that initial stage, she then begins “the journey to that place in the studio where things get more abstracted.” This is when the negotiation process starts, where one encounters the influences that were not present in nature, such as the influences of art history and the memory of working on earlier paintings. By negotiating these influences and responding to materials, she arrives at an indeterminate place between what is known and what is unknown.

Negotiating between the heavily loaded history of the traditional painting realm and the equally heavily loaded realm of feminism has been the conscious intention of Vancouver-based artist Angela Teng. Having studied feminist theory while at school – first at Camosun College, then at Emily Carr University of Art and Design – Teng searches to push materials and methods into unfamiliar territory. Art history has shown that women were largely excluded in a male-dominated area, and Teng felt that she needed to address this issue through her works.

As co-curator Nicole Stanbridge points out in her introduction at the tour, people’s responses to Teng’s works are piqued with curiosity, usually asking, “Is this a painting or a sculpture?” and “How is it made?” Angela Teng promptly answers the questions on process first, describing how she first prepares the paint by mixing and squeezing paint out of tubes into long skinny strings, allowing the “yarn” to dry and set, before crocheting into pictures. She traces this play between painting and sculpture to her early days at Camosun College, creating sculptural forms from fabric-like paint skins. Moving on to crochet as a technique led her to express ideas about the tension between high art and low art (craft).

Teng’s description of the crocheting process is warm and engaging. Her experience is akin to that of anyone who has knitted or crocheted, working the needle and yarn, watching the blanket grow and feeling connected to the object being created: “When I make these works, they flop across my body in the three-dimensional realm. It’s a bodily performance experience. It’s a meditative process that takes hours to make. Then I put it up on the wall to make it behave like a painting!”

The physicality of art-making and art-viewing is most apparent in The Best Laid Plans, the installation by the artists’ collective made up of Jim, Nathan and Cedric Bomford. As the participants of the tour moved into the next room where the Bomfords’ large construction-installation is mounted, the notion of “proper” gallery etiquette was perceptibly stripped away, as the Bomfords perched on their wooden structure, and several members of the audience scaled the set of bleacher-like steps to find seats. The informal nature of the gathering was further emphasized by Nathan’s two children climbing up into the structure and hanging monkey-like from it.

Nathan starts the discussion on how he and Cedric attended art schools and having come from a home where engineer dad, Jim, was always building and inventing “wild, crazy things”. They started collaborating about ten years ago when it made sense to do so. The title of the installation, The Best Laid Plans, is important in an ironical way. As Cedric explains, the reason for working the way they did, instead of drawing, is because of “the active movement of the body in the process of making”, a notion that echoes Angela Teng’s work too. As Cedric points out, the material is heavy construction lumber, so “you’re constantly fighting the material, fighting the budget, fighting your family!… There is a constant negotiation of process involved.” The title is an antithesis to their working method. Where in the real world, construction work needs to be up to code and planned in detail, Cedric reveals that it works in the opposite in the area of conceptual art.

When asked about how they felt about creating a site-specific installation, the concept of negotiation comes up again. Negotiation was involved because this was a group show, and the works by other artists were interwoven into the installation, in particular, the other large installation on the opposite wall, Nicholas Galanin’s Imaginary Indian totem.

An area of focus on the Bomford’s work is how people respond to it, with several members of the audience admitting to not knowing initially how to behave around the structure until they see other viewers exploring it or are told by museum guides that it was okay to walk through the installation. There was definitely a shift in how people responded to the structure, shedding their inhibitions and actively responding to the space. Cedric explains that it is one of their aims to make people aware of their surroundings, aware of the sound they make when walking on the wood planks and the physical presence of the obstructions. As if a rehearsed part of the presentation, Cedric’s toddler daughter totters over to her father, tripping and falling over the structure and letting out a loud wail, thereby enhancing the point her father was making.

While the three sets of artists use different materials and different ways of presenting their art, numerous themes tie them together to create a cohesive group exhibition that draws upon the act of making as a process of thinking. It’s In the Making ended on February 12.