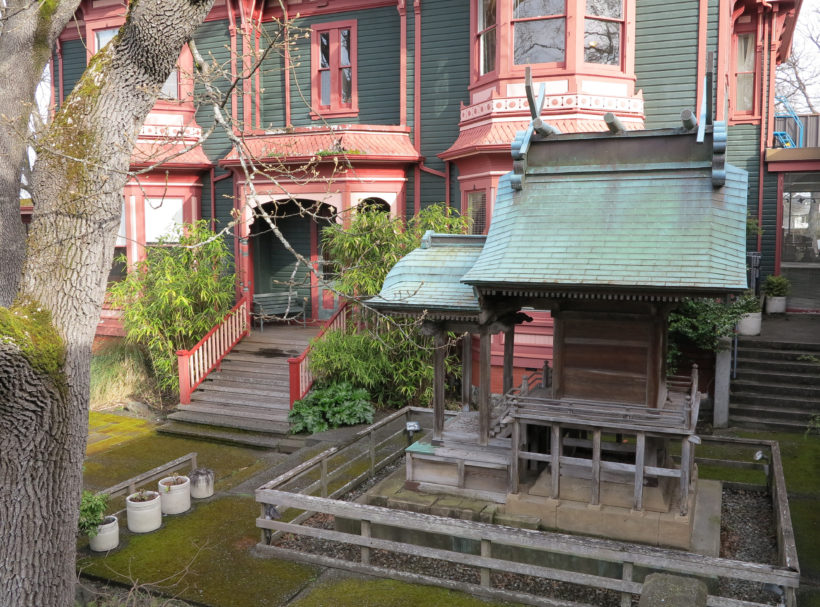 Nestled in the AGGV garden amidst bamboo and Japanese maple is the only known Meiji-era Shinto shrine in North America. Completed in 1899, the 33rd year of the Meiji period, this family shrine was built by the Hayashi family and was located in Hanami. In 1921, the people of Hanami were instructed by the government of the day to move all the local spirits (kami) housed in Shinto shrines to a centralized location, as many shrines were being eliminated or destroyed in an effort to replace provincial loyalties to a local deity in the spirit of nationalism and unity with the emperor. Unwilling to see the destruction of this finely crafted shrine, the Hayashi family moved it to their estate in Hanami, a village subunit of Togo village in Tottori Prefecture. It was placed on the ascent of a mountain and a bamboo grove was allowed to grow around it, and it became largely forgotten.

It was not until 1973 the Hayashi family fortunes declined to such an extent they decided to sell the shrine. It was bought and sold several times in the intervening years. Eventually, Seattle antiques dealer Jeffrey Cline of Kagedo Japanese Art, acquired it from a Japanese dealer and subsequently sold it on to the AGGV in 1987.

The shrine is a fine example of Meiji-era shrine carpentry, combining several styles of Shinto architecture – Taisha, Kasuga, and Otori – as well as exhibiting Chinese and Buddhist influences. Elevated on stilts, the shrine has two copper shingled gable roofs on a central axis covering a central building and a stairway. The entire structure sits on a hand-hewn hamachi sandstone base. In the central portion of the shrine, behind a pair of swinging doors, is an inner compartment reserved for a sacred object or the kami spirit. The shrine has a massive roof structure with ornamental ridge-end acroteria or gable ornaments known as tsuma-kazari.

The AGGV’s Shinto shrine has long been a highlight for regular and occasional visitors to the Gallery, not only for the tranquility of the Zen-like garden but also for the fascinating juxtaposition between the diminutive Japanese shrine and the grandiose Victorian manor looming beside it. Only ten years separate their ages, the Spencer Mansion having been built slightly earlier in 1889. Despite their structural and aesthetic differences, most would agree that the two buildings exist harmoniously together in a happy meeting of East and West.