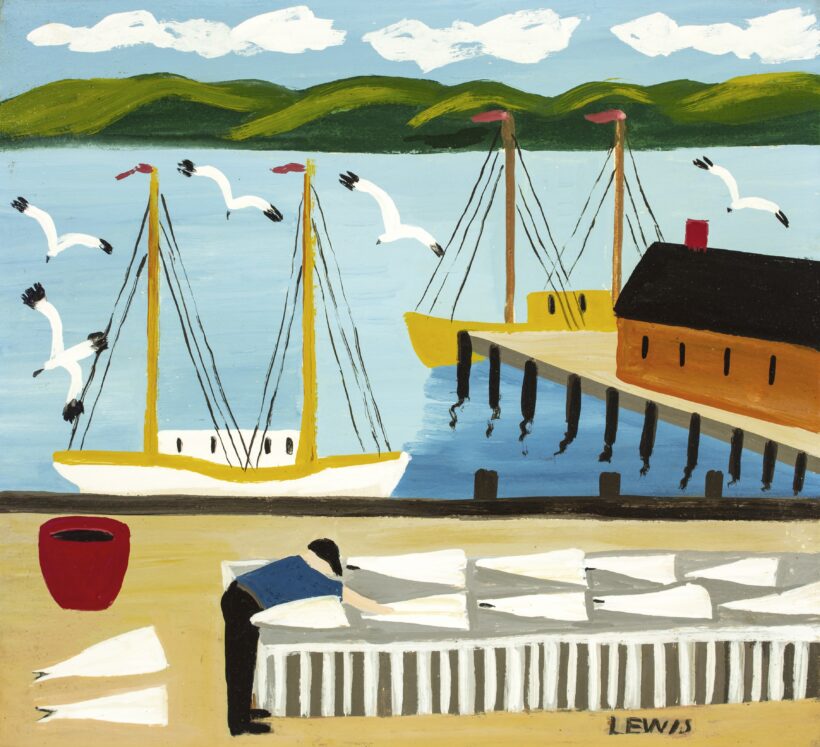 “I’m contented here… I ain’t much for travelling anyway. As long as I’ve got a bit of brush in front of me, I’m all right.” *

In exhibitions, press, and films about the artist, there has long been an emphasis on the fact that Maud Lewis never travelled far from the Yarmouth-Digby-Marshalltown corridor in western Nova Scotia. That she was a happy-go-lucky folk painter, not artistically trained, and one that merely painted “happy little pictures” for passers-by and tourists. This does not give much room for looking at her paintings as objects of art, and as being part of the wider economic, social, and visual culture of the time – which is the focus of the book.

While Lewis was painting references to her daily life, once collected and later institutionalized, her paintings would come to signify a bucolic landscape and the rural poor. Landscape, then, is a created place, subject to the uses, values, and memories we associate with it.

An artist well known to audiences in British Columbia is Emily Carr who painted on the west coast in relative isolation, exploring the land, spirituality, and her relationship to both in her art. One painting from the Art Gallery of Victoria’s collection, “Odds and Ends” (1939), demonstrates many of the themes common in Carr’s work: an exploration of the forest of British Columbia, the spirituality of the skies, and an increasing exploration of industry and its impacts on the environment. It was typical for modern artists of the time to approach landscape as a vehicle for artistic experimentation. This ability to both show landscape and also represent the feelings, emotions, and experiences associated with that landscape is something that can also be found in the paintings of Lewis.

Maud Lewis, like Emily Carr, rooted her explorations in a remote region, and also worked in isolation. And yet, one has been celebrated in the history of Canadian art, whereas the other remains fixed in art history as a “quaint” folk artist. Instead of the image of an isolated, rural-folk that is common in the positioning of Lewis as an artist in the public imagination, the book shows that Maud Lewis was in fact taking inspiration from the everyday objects, advertising and landscapes that surrounded her. She took these images, distilled them and made them into her own unique visions of art. This re-working of images of popular culture and re-imagining the landscapes around her is also a key way in which modern artists also approached their work.

Take, for example, Digby Gut, which is depicted in many of her paintings. Digby Gut is the narrow channel that connects the Bay of Fundy fishing waters to the Annapolis Basin. In Lewis’s paintings of this area, she uses it as a point of departure, adding and editing components such as colour, ships in the waters, and figures in the landscape. In other paintings of coastal harbours, docks and fishing boats you will often find seagulls swirling in the sky. Anyone that has been to a coastal area will recall the dizzying swirls of the birds, and their cacophony, always on the look out to steal a piece of fish off a boat, or the food from a passerby.

The paintings of Maud Lewis evoke the place, sound and emotions in which she lived. In Lewis’s landscapes, it is the details and her thoughtful selection and use of colour that add dynamism, and energy to the scene – where each painting is an object unto itself, worthy of close observation.

Dr. Laurie Dalton is the director/curator of the Acadia University Art Gallery and an adjunct professor in the Department of History & Classics. Painted Worlds: The Art of Maud Lewis, a Critical Perspective (2022) is available in the Gallery Shop.

Questions, Comments? You can reach the author at theroamingcurator@gmail.com
Or follow along on social media for more information and updates on the book: @artofmaudlewis