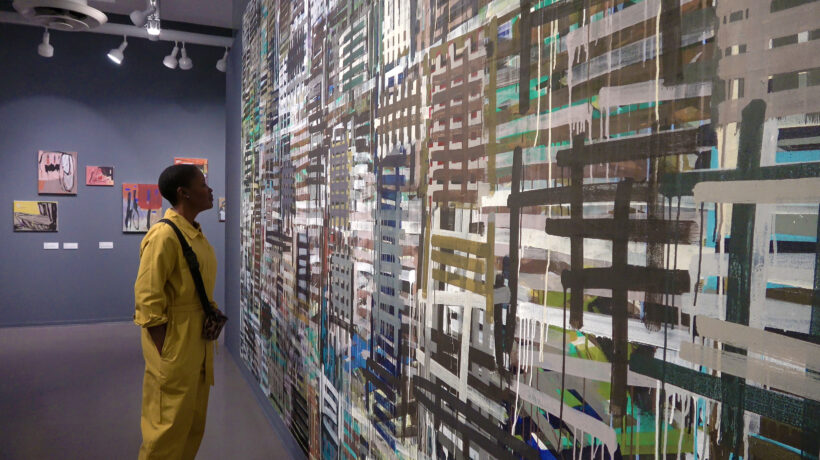 Victoria based film and dance artist Kemi Craig is the guest curator for AGGV’s programming series Blueprints for the Afrofuture. In anticipation of upcoming events Kemi shares with us her vision for this series and her experience since kicking things off with DJ Nova Jade’s Juneteenth Listening Party and Joshua Ngenda’s Instagram takeover.
__

Marina DiMaio: This program was sparked by ideas in the exhibition Denyse Thomasos: Odyssey (Dec 11, 2021 – Mar 13, 2022) which, through painting, spoke to the experience of the African diaspora. Our hope in working with you to imagine Blueprints for the Afrofuture was to hold space for Black artists and collectives from across BC, to acknowledge a range of contributions to BIPOC voices in Canadian art, and to offer space to gather (virtually and/or in-person) to connect with local communities. What is your vision for this program? What do you hope most for people to take away from it?

Kemi Craig: My vision for this program was inspired by Denyse Thomasos’ constructions of alternative narratives in terms of Black futures. At the same time that I was looking at her work I was also hearing about the Afropolis event that was happening, this year in France, but every two years it happens in different cities around the world. It’s basically this gathering of Black artists where participants aren’t meant to come with any preconceived ideas of what they’re going to make. Rather, there’s a gathering for a short period of time and at the end they know that they’re going to show something to the public, but what they show is guided by the various artists who happen to show up and what their skill sets and passions are. The public piece is whatever emerges from that gathering.

Similarly one of the things, as we were talking about the ways that we would like to gather, the openness of the AGGV, and working with you and Nicole Stanbridge and Jaimie Isaac, allowed for this emergence of things that I didn’t imagine at the beginning, but now feel like they make so much sense. For example, we proposed a sci-fi club with the idea that we could get together at the Gallery and operate similar to a book club where sometimes we’re looking through speculative narrative and science fiction, but sometimes we’re gathering to listen to albums from artists who developed the aesthetics of Afrofuturism, like Sun Ra, Drexciya and Alice Coltrane, and literary artists like Samuel Delany and Octavia Butler, and NK Jemisin and Nalo Hopkinson, and different Canadian artists. We’re setting some dates aside so that it can be very casual. Folks will have the ability to drop in, connect, and further that idea of just getting together to imagine. I don’t want to say that the sci-fi club will be more community centered, because the whole Blueprints for the Afrofuture program is community centered, but this will be a space where community is invited in to co-create in a very different way from some of the artist facilitated experiences.

MD: In your introductory video to the program, some of the questions you hoped to answer, alongside the community, included; Why is the act of gathering so important? How do we connect our various communities? How do we learn about and support local Black presence and experiences? Keeping in mind that these questions will have many answers, we’re curious to know if you’ve had a chance to think through them with some of the artists you’ve been working with, and what your thoughts are so far?

KC: Well, I would almost say that this is where, in terms of understanding the importance of gathering and the impact it makes on Black experiences and Black presences in BC, the community, I feel, is best to answer those questions. And as we’ve begun to go through this process with the artists, and as the artists are sparking imaginations through writing, music and art making, we’re beginning to reach out to organizations that can weigh in and say, “Check out this community or check out this person doing this work.” The idea is that we would be able to connect with each other, maybe initially one-on-one, but then the community has a way of saying what it is they need, rather than me having an idea of what the community needs. It’s a process of us being able to speak to each other and ask each other questions and come up with what we need, and understand that that’s always evolving and in flux.

My goal is to be able to connect with organizations such as the Students of Color Collective at UVic, the African Caribbean Students Association, Black History Awareness Society. There are some folks in town such as Nichola Watson, who is a counsellor but also runs an Afro Textured Hair Group, and Dr. Lisa Gunderson and Parker Johnson – they’re already running these youth groups that speak to Black experiences in lək̓ʷəŋən and WSÁNEĆ territory specifically. And Shalema Gantt, a former model from New York, operates a magazine in Nanaimo centered on Black history, Black contemporary experiences. So how do we connect with folks up Island that we may not hear from as often? There’s a bit more traction in terms of shared experiences, say in Vancouver, but we still need to get that level of connection and community building happening in our local context. So I guess the idea is to connect with different organizations, talk to each other about what our needs are, and then gather and inform the portal event, and then the projects can just continue from there.

MD: The first iteration of this program was an opportunity for the community to collectively capture feelings and vibes in musical Blueprints for the Afrofuture through a crowd collaboration/found-sound treasure-hunt with DJ Nova Jade. Nova Jade said that their contribution was partly inspired by the Zimbabwean proverb that says, If you can walk you can dance, if you can talk you can sing. Are there other points of resonance or inspiration that have come up for you since you started working on this program that you would like to highlight?

KC: Last summer, a different program that the AGGV sponsored was the While Black exhibition – organized by Charles Campbell, Michelle Jacques and Denise Ryner. And so being at Or Gallery, in that space, where we had our first gathering in Vancouver, but knowing that people will gather in various cities across Canada, was so powerful because what emerged from those meetings could have only emerged between us. That will never happen again in the same way. It was that ability to be able to come together, to talk with one another and really dream, fantasize and imagine future possibilities for ourselves for our communities. So that was my goal with this project. Particularly in BC, there is a growing African diaspora, and historically there has been a strong presence, but it operates very differently here than where I grew up in the Southeastern US. There you can see the historical markings of Black presence and that’s not always as visible in BC. And so the idea of having artists come together was that maybe we could connect Black artists, communities and organizations and create an awareness about each other so that moving into the future we could share with one another what we’re working on and be inspired and support one another. For example, Issamba is offering a dance project, and folks might not know that they frequently hold dance workshops with artists from Cameroon. Likewise, there are many organizations around BC and Victoria that are actually doing amazing work that we don’t always know about, because like Charles Campbell once commented, it’s almost like we’re operating in these little silos. So I would say that the idea was just for us to come together, learn about one another and what we’re doing and have a space where we could dream and imagine futures.

So, the idea with doing some of the online content was to build a virtual presence so that there could be more awareness about one another, in community, and then that would build momentum for in person experiences. Such as the upcoming Hidden Variables live performance and the culminating portal event – we’re not calling it a closing event, but rather a portal event because what we’re doing now continues, similarly with Thomasos’s work. What she’s creating is this idea of what could happen in the future, and all of the Blueprints for the Afrofuture projects don’t really stop, there’s a continuation of the themes in each one. So for example, DJ Nova Jade, just facilitated a crowd curated sound experience, but they will come back and do a second iteration of that, and they have even offered additional ideas so that work can continue. The program doesn’t end at the end of the year, but rather all of the work, all of the experiences will continue. So when we have the portal gathering in February, the idea is that it marks a new beginning, for new experiences.

I feel like there are a lot of folks from Black communities around BC that often have family living elsewhere. My entire family is elsewhere and many people have that experience of being the only one. It’s quite common when I speak to other folks of the African diaspora in BC. So now that there is so much online content that I get to participate in, folks that have family and friends in the Carolinas, in Detroit, or in Europe, the Caribbean, or all over the world, we’re able to invite them to gather with us and see what we’re creating and what we’re up to, and that feels really good.

MD: For the second program in the series Joshua Ngenda invited the community into his studio to watch a durational collage making performance during an Instagram live session. Could you share a little bit about what’s coming up next, in parts three, four, five, six… with artists Charles Campbell, Justine Chambers, Angie Riley, Ruby Diaz and Electronic Sound Collective Hidden Variable?

KC: Sure, I would say that the next two experiences will be online. One will be Charles Campbell, and Justine A. Chambers interviewing each other – both total powerhouses in BC, we’re so lucky to have them here. I’ve always wanted to get them in the same room and, surprisingly, they didn’t really know about each other’s work. They’re both incredible artistically and intellectually, and so I’m so excited that they’ll be gathering and speaking to one another. The other online experience will be with a local literary artist, Angie Riley, who will walk us, I would like to say nonwriters, through this intimate experience of going into her studio and leading us through character development for a literary story, but also just any persona. She speaks a lot through superpowers, and I’ve always had a fascination with the fantastical and conceptualizing what my superpower would be if I had one, or imagining if we could go beyond physics or what we think is possible, and create a reality for ourselves. So Angie Riley will facilitate that experience online by sharing more about her process in a video. After that, in October, Hidden Variables will create a way for an audience to engage, participate and influence a live performance. Then DJ Nova Jade will return for Kwanzaa. And lastly, we are still building Ruby Smith-Diaz’s project and I’m really looking forward to seeing what she’ll create.