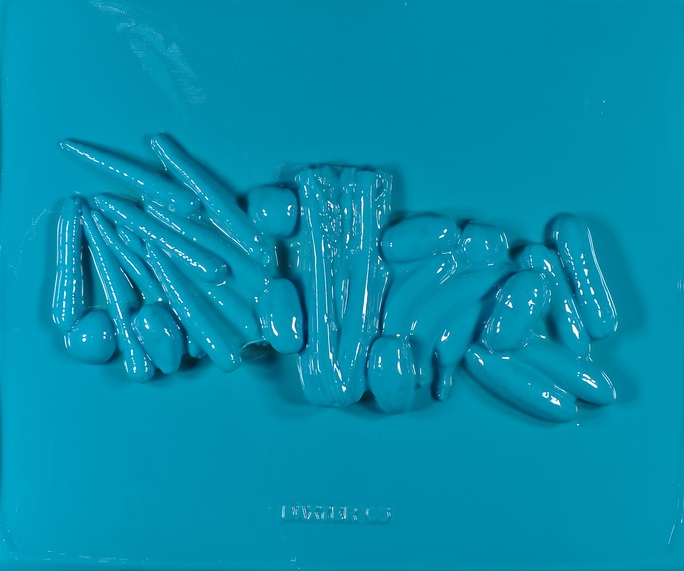 A wander through the Victorian-era Spencer Mansion of the Art Gallery will inevitably lead you to an encounter with Iain Baxter&’s Still Life made from vacuum formed plastic and painted with bright turquoise acrylic. Made in 1965, this sculpture is among a series of vacuum formed plastic pieces that Baxter& was well-known for.

Born Iain Baxter in Middlesborough, England, in 1936, he is considered one of Canada’s most influential conceptual artists. He legally changed his name in 2005 to Baxter& (pronounced “Baxter-and”), to reflect his fascination with the ampersand which he has said to symbolize a “non-authorial take on art production… an unending collaboration with the viewer and the means to question the artist’s role.”

Baxter&’s vacuum formed plastic works juxtapose the idea of high art with the consumerist world and things from everyday living, a theme prevalent in conceptual art. Shortly after the AGGV’s Still Life was made, Baxter& created the art collective N.E. Thing Co. where he and his then-wife Ingrid were co-presidents.

Iain Baxter& was always ahead of his time and continues to be an innovator. It seems apt that the present piece was owned by Colin Graham, the AGGV’s first Director, whose own vision for the arts in Victoria was also more progressive than most, at the time of his appointment to the AGGV in 1951. Graham kept up with art trends from around the world and was conscious of introducing the Victoria audience to new art approaches as they developed. He was a strong proponent of Baxter&’s works. Many other examples of Baxter&’s and N.E. Thing Co.’s works exist in the AGGV’s permanent collection.