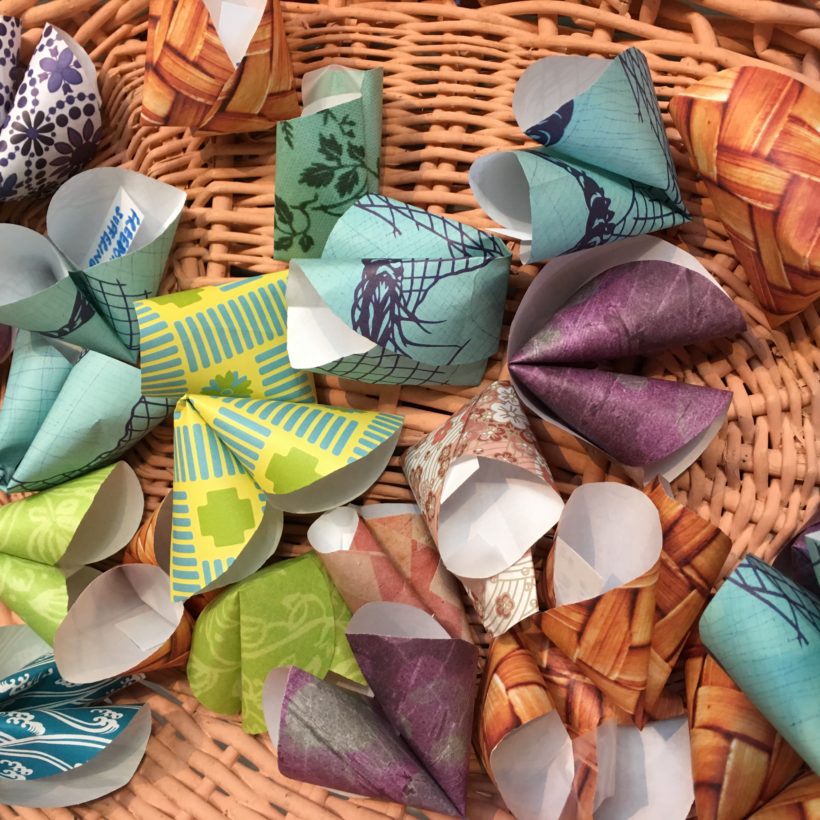 The first Family Sunday of the year on January 15 was inspired by the exhibition Millennia: Asian Art through the Ages, which features some of the Gallery’s finest examples of Chinese, Japanese, Korean, Indian, Tibetan, Thai, Laotian and Middle Eastern artworks.

Families turned up at the Gallery right at 2pm, looking forward to getting their hands messy with the promise of hands-on artmaking! At the front door, guests were greeted by a volunteer folding origami fortune cookies out of pretty patterned squares of paper. The kids wrote happy wishes on their squares of paper (parents weren’t allowed to look, to ensure the wish came true) and followed the volunteer as she demonstrated how to fold them into fortune cookies.

Up to the Gallery where the Millennia exhibition was being shown, a pair of boys showed much interest in the palanquin on display, with much discussion over how fun it would be to ride in one. They moved on to another part of Gallery with their mother and played a guessing game over the purpose of the painted pottery rectangular objects at the start of the exhibition, which were Cizhou pillows from the 11th-12th centuries. We all agreed they probably weren’t very comfortable!

In the beautiful Spencer Mansion, families were met with a plethora of fun art activities. One table was set up for sculpting tin foil into objects. The eager participants created a wide variety of objects including face masks, cups and saucers, mythical creatures, sailboats and much more! The next activity was directly inspired by the large blue and white Kraak charger in the exhibition – painting blue and white (paper) plates. The kids imitated the same effects of the lobed panels around the flattened rim and a landscape in the center of the dish. Many fine examples were produced!

After trying their hand at “porcelain painting”, the children were taught some Chinese at the calligraphy station, where volunteers with trays of sand taught the kids how to write numbers in Mandarin. It was such a clever way to learn something new, the tactility of the sand and the movement of the strokes embedding into the memory of each child, so that they were able to come away with a real learning opportunity.

Over at the next room, Hitomi Hamara, a kimono couturier, was wearing a wonderful purple kimono with pink sakura accents and a silvery pink brocade obi. She was the epitome of elegance and maternal affection as she taught the children around her how to fold origami cranes. Guests were also treated to some hot Panda Tea by Silk Road Tea, a wonderful end to an engaging afternoon with the family!

February’s Family Sunday took its inspiration from the new exhibition, Life with Clay: Pottery and Sculpture by Jan and Helga Grove. The retrospective is an extensive showcase of the Victoria-based artists’ body of work spanning over 50 years of collaboration. The organic anthropomorphic pottery vessels and sculptures were a perfect motivation for an afternoon of really messy fun with clay!

The first activity set up in the main foyer of the Gallery was a warm-up for the creativity to come. Children were encouraged to make marks using crayon pencils, akin to the sgraffito designs on many of Helga Grove’s pots that were inspired by the ancient pottery of Greece and Pre-Columbia. Once through the hallway into the Spencer Mansion, the messy factor was taken up a notch, as kids gathered around a long table crowded with baskets of greenery, seashells, pebbles, pipe cleaners, straws, plastic toy animals, varieties of crafty paraphernalia, and of course, lumps of clay waiting to be shaped and moulded into works of art. You needn’t ask twice – the young potters were enthusiastic with their mission, making some incredible fantasies of art!

Guest facilitator, Korinne Vader, held court in the next room where she displayed a selection of her hand-made ceramic jewellery, many of which featured beads covered in smooth coloured glazes. The organic shapes and earthy tones mirrored the Groves’ pottery artworks in the Gallery. With that in mind, Korinne showed the kids how to roll the clay into beads and decorate them with various implements.

The next Family Sunday will take place on March 19 inspired by the Cherry Blossom Season. We hope to see you there!