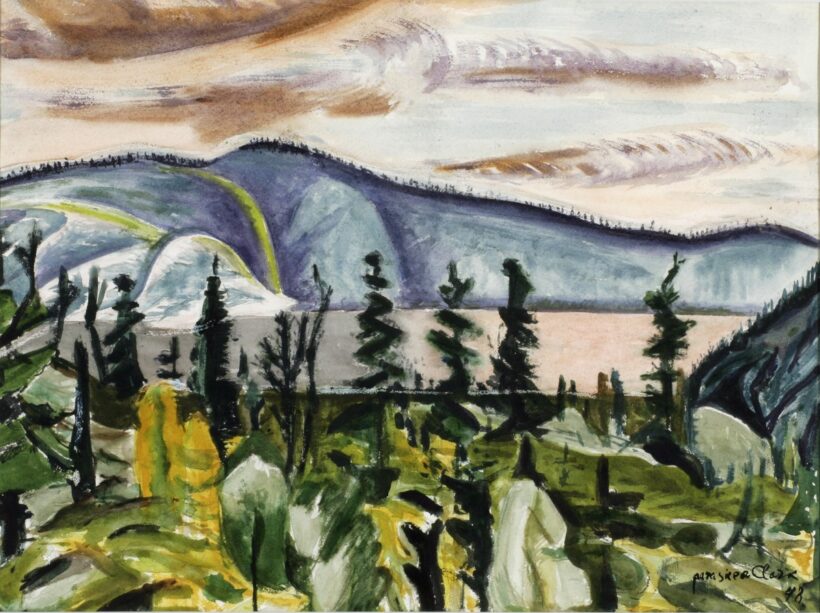 The AGGV is honoured to have in its collection a painting by the prominent female artist Paraskeva Clark. Executed in 1948, the watercolour depicts one of the artist’s favourite summer locales of Georgian Bay. It also marks a period of proliferation in her artistic output when her travels to nearby scenic spots allowed her to paint more landscapes.

Born Paraskeva Avdyevna Plistik into a working class family on October 28th, 1898, in Saint Petersburg, Russia, Paraskeva led a humble early life, living in a one-room apartment with her family of five. Nevertheless, she was allowed four more years of schooling than most girls of her socio-economic status because of her father’s belief in education. Although she was drawn to theatre, she enrolled in art classes instead at the Petrograd Academy from 1916-1918, while working in a shoe factory. At the academy, she learned about Impressionism, Post-Impressionism and Cubism, participating in the lively discussions about art and challenging accepted bourgeois conventions.

Russia after the first World War and the 1917 revolution was a tumultuous time of conflict, unrest and deprivation for its people. Paraskeva continued painting and was hired in 1921 by the Maly Petrograd State Academic Theatre to paint sets. While there, she met Italian stage designer Oreste Allegri Jr. whom she married in 1922. Their son Benedict was born in 1923, the same year Allegri Jr. died in a drowning accident. Paraskeva and Benedict moved to Paris to join her in-laws, as planned before her husband’s death. In Paris, she managed to keep up with the vibrant art scene but had little time for her own practice. In 1929, she met Canadian Philip Clark and they were married in 1931 in London before travelling to Toronto with Ben.

When Paraskeva Clark arrived in Toronto in 1931, the local art scene was evolving, with landscape painting being at the centre of debate. She exhibited her landscapes, portraits and still-lifes at various artist shows and exhibitions, and was an active member in various art societies. She was associated with many of the predominant artists of the time. In 1937, Paraskeva met Dr. Norman Bethune who had recently become a Communist. Under his influence, Paraskeva embarked on painting works based on her own experience of Russia. Where her paintings had previously been non-political in nature, they were now charged with a rhetoric that reprised her earlier outspoken socialist self from her life in Russia. Petroushka (1937) is considered one of her most important works. It was exhibited at the Great Lakes Exhibition (1938-39) and at the New York World’s Fair (1939-40). She was also heavily involved in charity work in paid of Russia and the war effort during the Second World War.

The majority of Paraskeva’s works were in the genres of landscape, portrait and still-life, and her artistic output increased in the late 1940s. Her summer trips to Quebec, Georgian Bay, Muskoka and Algonquin Park provided her with subject-matter, such as the painting in the AGGV Collection of Northern Georgian Bay. She went on to hold several significant exhibitions throughout the 1950s, showing new painting but also retrospective.

Later in life, Paraskeva Clark spent less time painting, and more time on her family, with Ben dealing with mental health issues and her second son, Clive, married and giving her three grandchildren. Exhibiting works became more challenging and it was not until 1975 in an exhibition of Canadian Paintings in the Thirties by the National Gallery that Paraskeva Clark’s contribution to the history of Canadian art came to be fully recognized.

Paraskeva Clark’s works represent the experience of an émigré to Canada, and brings a diversity and a unity to the history of Canadian art in the 20th century.