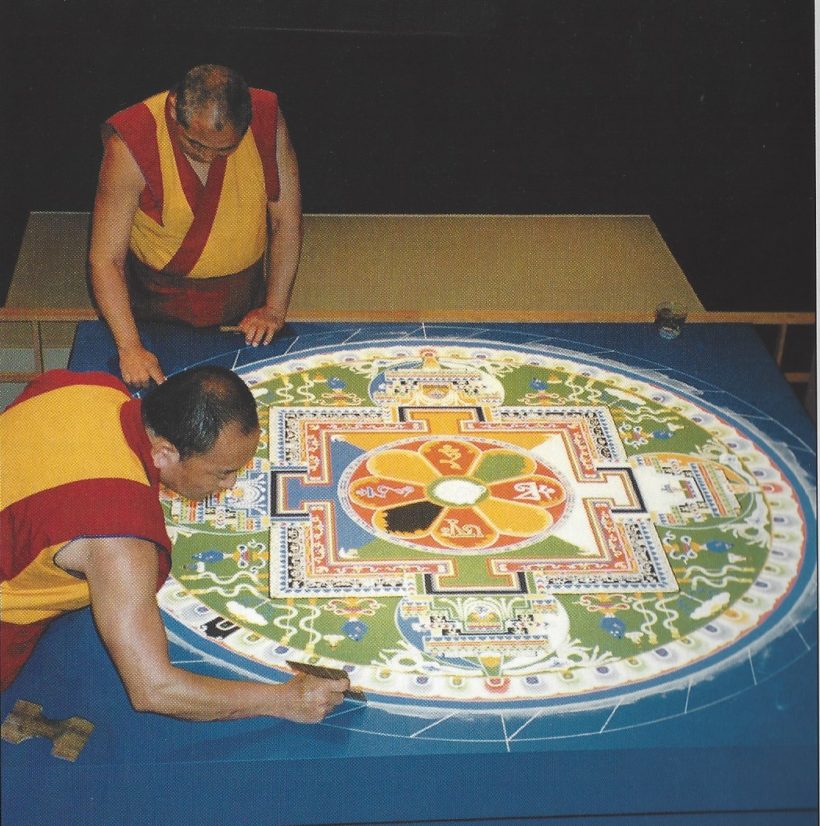 1. What is a mandala? The mandala is a Buddhist devotional image that represents the ideal universe. The Sanskrit word can be roughly translated as “the container of the true nature or essence of things”.

2. What is the mandala used for? The mandala is considered a sacred realm and therefore an aid to meditation. It is a visual prayer that helps the devotee achieve the perfect self and an enlightened mind, in emulation of Buddha.

3. Mandalas originated in India, as evidenced by their descriptions in ancient Sanskrit texts. They were then transmitted to Indian Buddhism, and while this tradition has largely disappeared over time, the concept of the mandala is very much embraced by Tibetan Buddhists. Mandalas can also be found in other religions in India, such as Hinduism and Jainism.

4. The basic configuration of the mandala comprises a ring encircling a symmetrical walled palace with a gateway in each wall corresponding to each of the four cardinal points of the compass.

5. The mandala contains a multitude of symbols that represent the countless worlds and systems in the universe. Generally speaking, the innermost circle of the mandala contains the central deity, surrounded by his/her entourage, and the outer level symbolizes the world in its divine form.

6. Painted mandalas: Mandalas come in several forms. Painted mandalas appear as murals on the walls of temples or monasteries, and as scroll paintings called thangkas. These paintings are the most detailed portrayals of the mandala.

7. The sand mandala is perhaps the most intriguing and attractive of the artistic traditions associated with Tibetan Buddhism. Great skill is required to create the intricate designs with coloured powder or sand. The process is painstakingly long, taking weeks to create. As part of the ritual which also includes prayers and consecration, the completed sand mandala is then destroyed, to represent the impermanence of things.

8. Three-dimensional mandalas come in the form of building models cast in metal or constructed in wood. Several impressive bronze mandalas can be found in Tibet and Mongolia, constructed with moving parts and intricate levels of symbolism.

9. Who are the artists that create the mandalas? Most of the artists, both past and present, are monks or pious laymen. All of these religious-minded men and women would have been required to go through initiation rites and strict training.

10. Mandalas are created by a commission of a patron, usually on the occasion of a special event or as a commemoration. The AGGV engaged Tibetan monks to create its first sand mandala in 1993 (pictured above), in conjunction with the Dalai Lama’s visit to Victoria. Subsequently, sand mandalas were again made (and dismantled) in the Gallery in 1996 and 1999. The AGGV’s Asian art collection comprises several important Tibetan Buddhist scroll paintings and ritual objects.