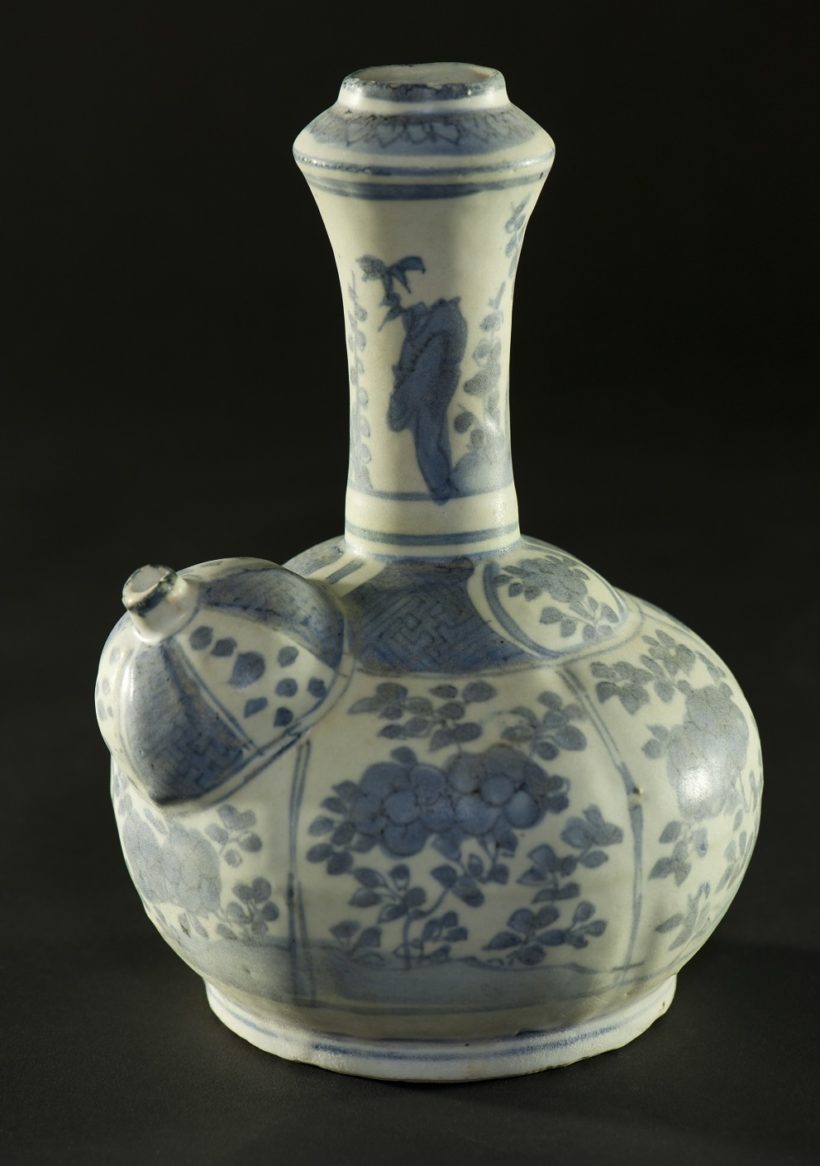 1. The famed blue and white wares of the Ming dynasty (1368-1644) has its origins in the preceding Mongol-ruled Yuan dynasty (1279-1368) when Chinese potters were free from imperial obligation to experiment in new designs and methods of porcelain production.

2. The distinctive inky-blue pigment was derived from cobalt imported from Persia during the Tang dynasty (618-907). The Persian cobalt was high in iron while the local Chinese cobalt ore was higher in manganese, both creating different results in tonality.

3. The rich blue designs stand out against a pure white porcelain body which is made primarily from kaolin. Porcelain is characterized by its whiteness, translucency, considerable strength, low permeability, and high resistance to heat.

4. Blue and white porcelain wares are also known as underglaze-blue, as the designs are painted with cobalt pigment, then covered with a clear glaze before it is fired in a kiln at a very high temperature of between 1200 and 1400 degrees Celcius.

5. Chinese blue and white porcelains have been manufactured in Jingdezhen, Jiangxi province, since the Yuan dynasty and production continues today, giving it the moniker of the “Porcelain Capital”.

6. Blue and white porcelains from the Yuan, Ming and Qing dynasties were made in a wide variety of shapes and painted with all sorts of designs, including dragons, phoenixes and other mythical beasts, flowers and fruits, landscapes, portraits, Buddhist and Daoist symbols, stories from history and mythology, and auspicious Chinese characters.

7. Because of all its desirable qualities, blue and white porcelains count as one of China’s biggest exports from the Yuan dynasty onwards, with markets for it in the Middle East, Europe, Japan and Southeast Asia. The buyers include both foreigners and overseas Chinese. To cater to these foreign markets, specific shapes and designs were made specially. For example, the kendi (pictured above) featured in the exhibition Remembering A Patron was made for the Southeast Asian market, whence the shape originated for use in both ritual and everyday life.

8. In China, the biggest consumer of blue and white porcelains was the Ming imperial court. Around the time of the reign of Emperor Yongle (r. 1403-25), painted reign marks began to appear on the bottom of both monochrome and underglaze-blue porcelains. These were written in running script. Later in the Qing dynasty (1644-1911), seal marks in both underglaze and overglaze pigments were used.

9. Imperial patronage paid a huge part in the production in blue and white porcelain, as each emperor had his own specific interests and would commission designs accordingly. For example, the Ming emperor Zhengde (r. 1506-21) was said to have embraced Islam, and hence from this period, there was a proliferation of wares made in Islamic shapes and decorated with Arabic calligraphy quoting verses from the Koran.

10. Imperial blue and white have always been highly coveted by collectors of Chinese porcelain. One of the highest prices paid at auction was for a blue and white jar from the Yuan dynasty, which sold at Christie’s in London for over 15.6 million pounds sterling in 2005.