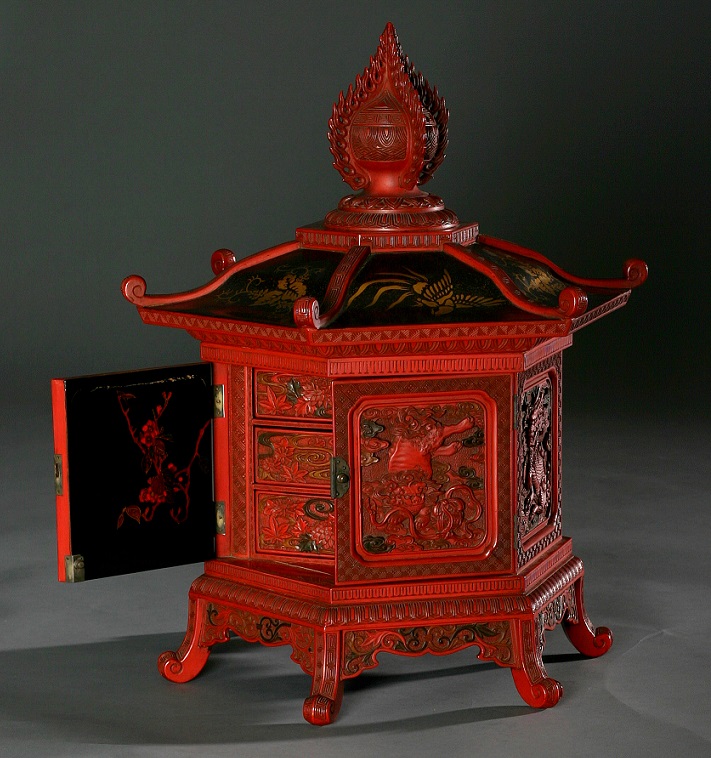 1. Lacquer is a uniquely East Asian product and material, as it is derived from the sap of the tree, rhus verniciflua, which is native to China and Japan.

2. Used as early as the Neolithic Period in China (c. 6500-1900 BC), lacquer has long been prized for its resilient coating used to cover objects made from more delicate material, such as wood, bamboo or cloth. Not only is lacquer water-resistant, but it also withstands heat, repels insects and takes on a colourful and shiny surface that is attractive.

3. The manufacturing process is a labour- and time-intensive process. Thin coats of lacquer coat the wood or cloth core, each coat taking weeks to dry and set before the next layer can be applied. Temperature and humidity also play a critical part to allow the layers to dry without cracking. After it has set, the hard lacquer surface can be painted with different pigments.

4. Early lacquerware in China include food vessels such as cups and bowls, cosmetic boxes, musical instruments, furniture, Buddhist sculpture and even, coffins. Vessel shapes were often derived from bronze, gold and silver prototypes.

5. In terms of decoration, paints and gilding were most commonly used to create designs and vignettes, as seen in the Japanese bowl above.

6. Another popular method for decoration is inlaying gold, silver and mother-of-pearl, a practice that began around the Tang Dynasty (AD618-906). Known by the French term “Lac Burgauté”, the effect is iridescent and jewel-like, so it tends to be used for small objects such as the cup pictured below.

7. The Song dynasty (960-1279) in China saw lacquer and gold used in unison to decorate vessels and religious items, such as sutra cover and boxes.

8. Carved lacquer in China emerged as a trend around the Song Dynasty, and the first designs were the so-called guri patterns, a Japanese term used to describe the spectacle-shaped scroll patterns. These patterns were cut in a V-shaped profile through alternating layers of red, black and yellow lacquer. The dish pictured below is a typical example of guri lacquer.

9. Pictorial carved lacquer was perfected from the 14th century onwards in both China and then in Japan. Designs of flowers (peonies, lotuses, chrysanthemum and other seasonal florals), birds, dragons and phoenixes, mythical creatures and landscapes showed off the craftsmen’s fine workmanship. The lantern-shaped cabinet (featured above) combines carved vignettes with red and gold painted panels and interiors.

10. Lacquer was a popular export item to the West from the 16th/17th century onwards, with screens and bureaux, tea caddies and storage boxes, made to Western specifications.