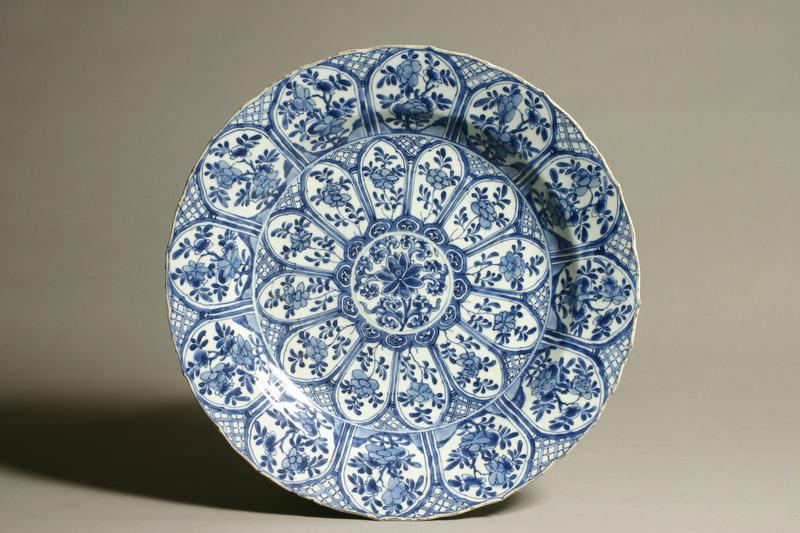 1. Kraak wares were made in the 17th century by mass production at the Chinese Jingdezhen kilns in Jiangxi province to meet the demands of the Portuguese market, and later the Dutch market.

2. The name Kraak came from the Portuguese ships called carracks which carried the porcelains and other goods to Europe.

3. The body material of Kraak porcelain is generally of good quality, and the potting is fairly thin and light in relation to their size. The thin base of all the wares, whether bowls, dishes, plates, ewers or vases, has what are known as “chatter marks”, which are irregular radiating lines from the centre to the foot-ring.

4. The decoration on bowls and dishes, and sometimes also on vases and bottles, is characterized by the division of the surface into panels. On dishes, the cavetto may also have moulded designs, consisting of round of ogival medallions or simple ridges.

5. The painted decoration on the lobed panels of Kraak wares is usually made up of plants or fruits, or geometric designs. This series of diaper patterns frame a central circular field from which they radiate. The centre is usually freely painted with birds or animals in landscape, figures in various settings or with a flower-filled wicker basket.

6. The landscape designs on Kraak wares gave Chinese painters a newly found opportunity to demonstrate their ability in rendering imaginative scenes, while allowing them to be in keeping with the appreciation for landscape painting in Europe.

7. Kraak wares with armorial designs are very rare, but a few do exist, demonstrating that special pieces were also commissioned for important customers. An example of a plate with a stylized coat-of-arms surmounted by a helmet and attributed to D. Joao de Almeida, a Portuguese Chief Merchant who settled in Macao in 1570, can be found in the British Museum.

8. Reign marks and shop marks are very rare on Kraak wares, but not unknown. Marks may include a painted object or animal, such as an egret or a hare.

9. Information about 17th-century Kraak ware is abundant, thanks to the preserved records of the VOC or Dutch East Indies Company which provide detailed information on the trade in Kraak porcelains.

10. In later Kraak wares, some Western elements were absorbed into the repertoire of mostly Chinese designs. Of the great variety of flowers that were depicted on the panelled borders, tulips became a popular choice in the 1630s, reflecting the craze for these native Turkish flowers that were introduced in Holland in the last quarter of the 16th century.