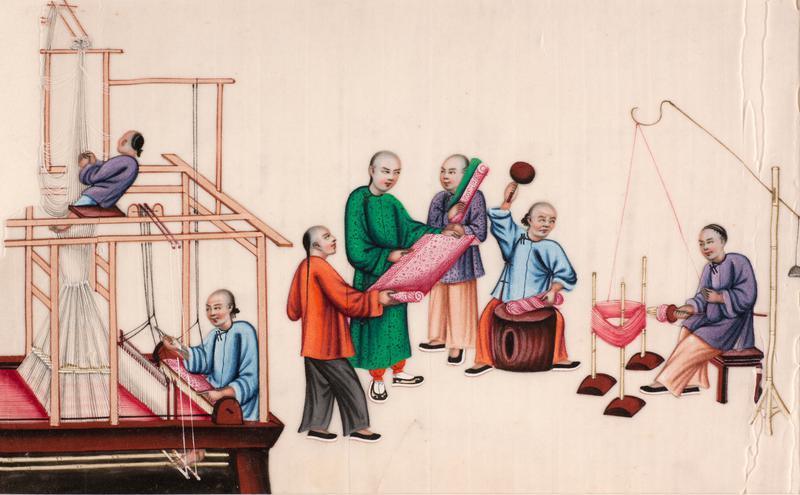 1. Chinese silk robes hold a pride of place in the AGGV’s Asian art collection. These include robes for men and women, woven from the finest and most vibrantly coloured silk from the 18th and 19th centuries, intricately embroidered and beaded.

2. Chinese silk has been made since Neolithic times, and from the Tang Dynasty (618 to 906 A.D.), it became a globally traded commodity that was in great demand. The famed Silk Road connected China with Europe, India and Africa, where silk was the primary export item.

3. Have you ever wondered how silk is manufactured? The process of sericulture is well documented in a series of paintings bound in an album in the AGGV collection. The illustrations in this article are a selection of paintings from this album. Albums such as these were made mostly in the 19th century for the export market. Today, they serve as a clear document on how silk is made, and continues to be made, albeit with mechanical processes introduced since the 20th century.

5. The dried cocoons are unwound and several filaments are twined together to make a single thread. This part of the job was usually done by women.

6. The threads are dyed next, and once reeled, they are ready to be woven into cloth.

8. The album painting below shows the warp being prepared with the silk threads being looped around the loom frame to start off the process. Once the warp has been set up, the weaving commenced as seen in the painting in the feature image.

10. For centuries, the Chinese kept the silk manufacturing process a secret, decreed by imperial law that forbade the export of silkworms and their eggs. Their monopoly ended around the 4th century AD after other East Asian countries such as Japan and Korea were able to learn the secrets of sericulture. Since then, the techniques spread to the rest of the world, although Chinese silk remained the most coveted.