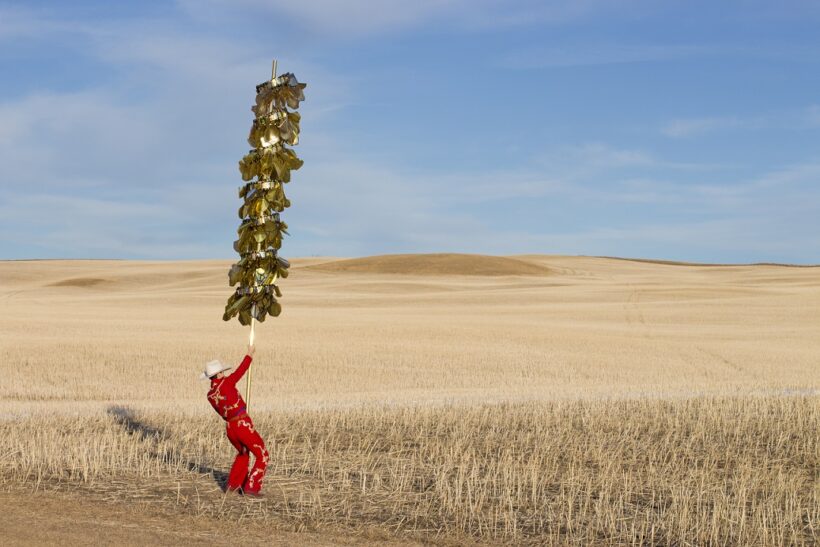 Opening at the Gallery in June is a body of new work by Victoria-based artist Megan Dickie. Blue Skies features video and sculpture installation that resist easy interpretations. Dickie’s practice uses extreme physicality, choreographed set-ups, and fantastic failures as a means to poke at dominant systems and structures.

“The five-channel video installation opens with a cowgirl bracing a massive golden sculpture in whirling prairie winds. Her struggle ripples in waves throughout the screens until a small beat arises, synchronizing all the cowgirl’s hips. One by one each screen switches to a breathtaking new location and costume. It is here that the movements fuse into country line dance steps. Just as the rhythm regulates, an intensified beat shifts the image down to her feet. Now a troop of legs stomp us into the next scene where the struggle amplifies between the cowgirl, her environment and the erect golden accessory.

The performance of power continues with glittering, hypnotic sculptures that claim the gallery space. A series of brass objects adorned with silk, glass and semi-precious stones are placed across golden surfaces. The ceremonial-like sculptures reflect the performance structure from the video but without the authority of uprightness. Laid down, they upset monumentality but retain power through surface, seduction and detail. Intricacy continues with two, twelve-foot fabric wall structures that billow under a mechanical breeze. Stitched with thousands of gold Mylar rectangles, the sculptures dance like bodies adorned in sequins, demanding and controlling attention through movement.

Throughout the exhibition, power fluctuates between form, scale, material and monumentality. While movement shifts attention to the struggle for agency and a determination to claim space.” -Megan Dickie

As her protagonist’s pursuit is doomed to failure, Dickie effectively conveys the absurdity of our obsessions with success and the lengths we would go to for a particular outcome.