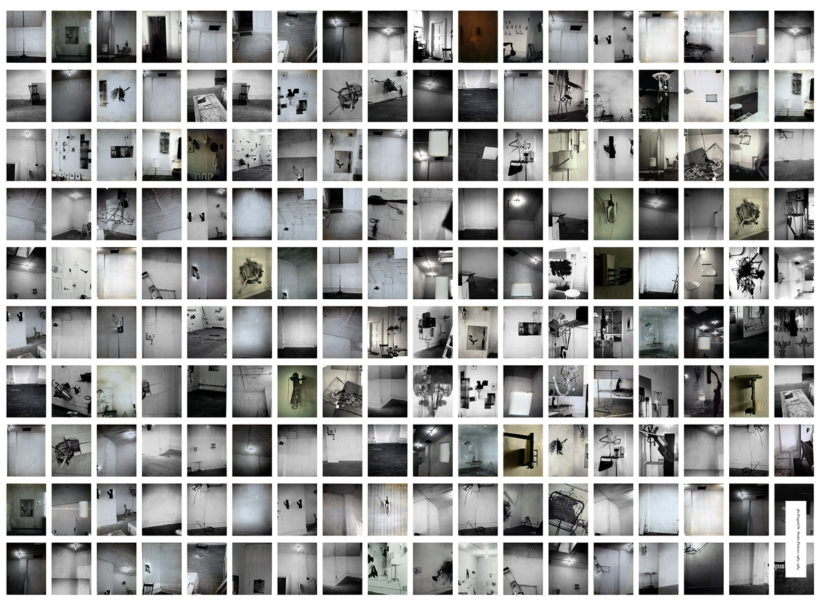 Pictured: Lynda Gammon | Studio Pictures (562 Fisgard) | 1983-1989 | Polaroid photographic prints | Purchased with the support of the Canada Council for the Arts Acquisition Grants program and the George and Lola Kidd BC Art Acquisitions Fund, 2016.

Entering through the bright red door tucked amidst a bustling Asian grocery store, a Chinese bakery and a dressmaker’s shop, artist Lynda Gammon led us up a set of dark, narrow, stairs that seemingly brought us to a different era in the heart of Victoria’s Chinatown. The building, 562 Fisgard Street, is owned by the Chinese Consolidated Benevolent Association. It is one of the oldest buildings in the area that formed the grouping of structures to become the oldest intact Chinatown in Canada. While the ground floor is fronted by retail stores and restaurants, the upper levels are distinctive for their character Italianate facades and elaborate ironwork. Yet, little is known about what goes on above the shops at street level. As we ascend the staircase, it is evident that little has changed in the last 150 years or so. We were warmly welcomed by Gammon and fellow artist and studio mate, Todd Lambeth, into a bright open space with soaring ceilings. This was their studio, and we had the pleasure to interview these two inspiring artists and teachers.

Q: How did your studio in Chinatown get started?

Lynda Gammon (LG): This building is owned by the Chinese Benevolent Society which shelters the interests of the Chinese community. There was a shrine room in here, maybe a school, and possibly at one time, home to migrants. I first came to this studio in 1982, when the City (of Victoria) suggested that artists be allowed to use this otherwise derelict space. Trudi Smith and I share the back space and Todd uses the front. And there are three other artists next door.

Todd Lambeth (TL): I’ve been in here for 9 years. Over that period of time, there has been some turnover.

Q: This space is obviously very special. Does the idea of studio space influence your work, or how you engage in your work?

TL: I’ve been thinking about how to talk about the idea of studio space. Up until a year ago, the work I made was pretty much dependent on the space itself, and I was very influenced by the space and the idea of painting in a contained studio space. Then I discovered what I could do on a laptop. So all of a sudden, I can design collages and figure out ideas away from here, but the actual labour aspect and the coming to a conclusion with the painting comes together in the studio. So, it’s really opened up the idea of what the studio is and particularly with digital technology, the ideas are less dependent on the space to keep it going. But the freedom to have this space is phenomenal! The freedom to work on ideas and to expand on them…

LG: What’s amazing about this space is that so much of it is original to the building. Like this wall (pictured above)… I remember it from 1982/83. At that time, I wasn’t interested in the history of the space at all. When I first came here, I just wanted to paint it all white and make it look like an artist’s studio. I remember being annoyed that the paint just seeped right through, and the wall wasn’t even and flat. Anyway, I carried on working in here and putting the work up on the wall and I was documenting it. And when I took some of the work away to the Vancouver Art Gallery, I became quite alarmed at how different the work looked when I removed it from the studio. The studio had so much “noise”, like that background with all the relief work.

Q: Was that a turning point for you?

LG: That was when I decided to take the photographs of the objects in the studio with that background. That was what led me in that direction. And all the work since has really been about this studio. It’s been the subject matter of my work.

Q: What brought you back here?

LG: About 8 years ago, I had a PhD student (Trudi Smith) who was an anthropologist and a visual artist, and she found a studio space that turned out to be this very space on Fisgard Street. It had been 15 years or so since I’d been in here. I was amazed that the wall was still the same! And there remained all this drawing that I did on the wall – it’s still there! She said, now wouldn’t it be interesting to peel back the wall and see its history? She’s an anthropologist, you see. As we peeled it back, we found newspaper dating back to the 1920s, and wallpaper and writing and eventually, this painted surface with wainscoting. It was interesting so we decided to build this giant camera (pictured below, right) to photograph this wall. The camera takes a 16-by-20 inch negative. The notion of getting that incredible amount of detail was of interest to us. It was, essentially, peeling back the wall and taking photos of the wall. It relates to the work I’ve been doing, including the work in the AGGV now, which is basically, the same wall but with objects on it.

Q: The history of the building and the area really spoke to you. Have many other people been up here?

LG: We’ve had lots of people come through the studio to experience the photographs and to experience the camera and the whole thing together! You could take these (photographs mounted on the wall of the studio) and show them in a gallery but so much would be lost. The experience is so much about being here and talking about it, and talking about the history of the building. There’s very little known about the building because the Chinese, back then, kept to themselves. They encountered a lot of racism, so these areas were really private. People don’t know what happened in here… Many groups have come in here, through the University (of Victoria) – anthropology classes, history classes, photography classes. People have even been in here to meditate on the wall! Everyone has a different connection to the space. For me, it was a different way of making art and experiencing art, showing art and apprehending art. I don’t even know if it’s art, or just experiencing the world that’s got art aspects to it. The space has become a place to play around with photography, and to have discussions about the space and the history of Chinatown and the history of the Chinese being in this space. I find it an interesting dialogue – interesting, complicated, all entangled.

TD: Plus the energy on the street is very unique to Victoria. You have to negotiate the grocery deliveries and people on the street. You leave the hubbub of all that to the peace up here. I’m very conscious of where this space is. I think it’s fantastic to be a part of all that’s happening out there, and the history of this space. Working in here, I quite often feel overwhelmed by the history of the building. It’s like stepping back in time!

Q: Does this space give cause for you, as artists, to collaborate?

LG: Trudi and I rent the back space together and we collaborate on the project where we’re working with camera. We’re using this space for a specific project.

TL: I don’t collaborate. I just work on my painting practice. But the presence of the other artists in the space, particularly Lynda, has made me evaluate my work ethic. We have a community here, and it is special.

Thank you, Lynda and Todd, for the insightful tour of your studio!