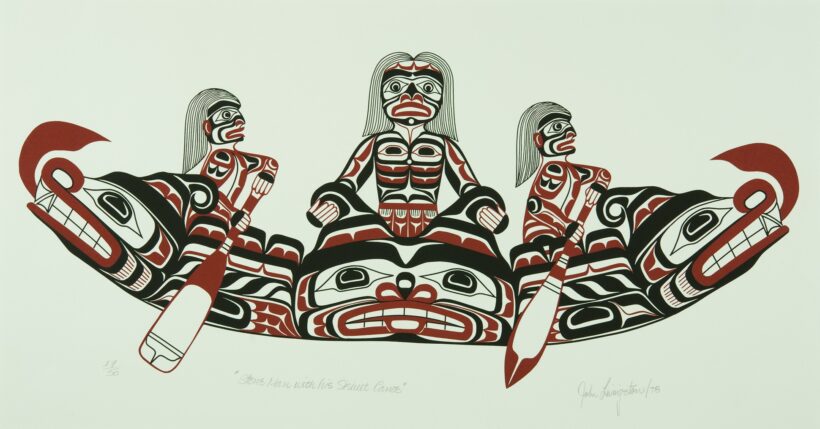 1. When the print media became a preferred medium for many First Nations artists, the artists practicing in the Northwest Coast developed a distinctive aesthetic culture that grew over the past 60 years. This is what is generally termed Coast Salish art.

2. Although there were many different dialects spoken, the shared linguistic traits and the geography of the Salish communities (Olympic Peninsula, Seattle, Vancouver, Vancouver Island) created a visual vernacular based on common understanding. Each cultural group created their own distinct objects and images, but the iconographies were related aesthetically.

3. Coast Salish designs are made up of particular shapes including crescents, extended crescents, ovals (or circles) and trigons. The seals in the print above by Charles Elliott are embellished with all these shapes.

4. Formline is a term coined by art historian Bill Holm in 1965 to describe the fluid abstractions of Northern coastal designs, including the types of lines, symmetrical forms, and the ovoid, a shape particular to formline. The primary formline is considered the main continuous outline that creates the shape of the main subject matter.

7. The Orca or Whale symbolizes kindness, family values and unity because of their nature of living in pods or family groups.

8. The Bear is a symbol of family and strength as characterized by motherhood and the mother bear’s strong instinct to protect her cubs.

9. As Salmon is a primary food source of the peoples of the Northwest Coast, it features in their art to symbolize abundance, wealth and prosperity. As supernatural beings, Salmon are revered and celebrated for giving up their life to feed the people.

10. The Loon is considered to be a messenger of the land. According to legends of several Coast Salish nations, after the great flood, Loon was sent out to look for dry land and returned with a willow branch, indicating that the flood was receding and dry land found.