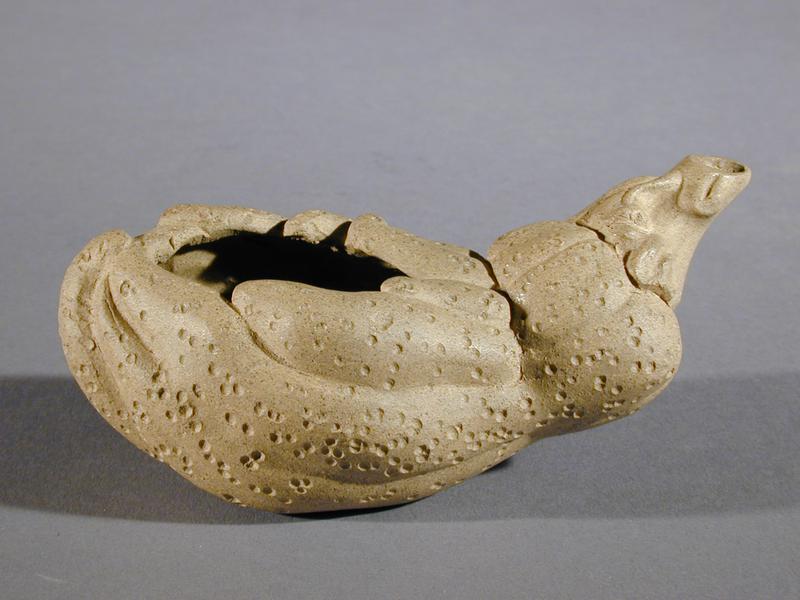 What on earth could that be? The evolving nature of consumer goods might have us scratching our heads with pieces from the past. As trends and fashions come and go, objects go from being at the height of popularity to becoming obsolete and their original uses forgotten. The AGGV’s permanent collection houses a variety of interesting and unusual vessels from around the world. What were the function of these items? Test your knowledge in our quiz!

1. Pictured above is a Chinese Yixing pottery vessel is shaped like a finger-citrus, a gourd that is significant to Buddhist culture and iconography. The user of this vessel may take inspiration from Buddhist philosophy, clearing their mind before putting ink to paper.

2. This blue and white Worcester porcelain cup of ogee shape with a pair of delicate scroll handles is part of a service that included other cups, saucers and pots. This cup wasn’t made for tea, as teacups only have a single handle. What then was this unusually shaped cup made for? The beverage in question is commonly drunk now – just pop into your local Timmy’s or Starbucks – but in the 18th century, it was a rare and exotic commodity, consumed only by the upper classes and in precious vessels made of porcelain or silver.

3. While we’re on the topic of consuming, this ancient bronze ritual vessel is called a jue. Vessels like these are found in tomb burials in China from the Shang dynasty (1500-1050 BC). This jue in the AGGV Asian Art collection is typical – an elongated cup-shaped body standing on tripod legs, with an open spout and a pair of posts at the top rim. What was the purpose of this vessel?

4. These Chinese white nephrite cylinders have been enhanced and repurposed to great effect! The Sterling silver additions were likely made in Guangdong to British specifications to turn them into a set of salt and pepper containers. Can you guess what the original purpose of the jade cylinders was?

5. This simple and somewhat innocuous pot with an attractive underglaze-blue decoration of peonies has an unfortunately unpleasant use. It was one of over 600 pots of this type on board the Geldermalsen, a Dutch East India Trading Company cargo vessel that struck a reef and sank off Indonesia in 1752. The ship was carrying ceramic pieces, tea and Chinese gold ingots from Guangzhou to the Netherlands. What was this pot known as?

6. Unlike #5, the floral design on this cuboid vessel hints at the purpose of the container. The brick-like receptacle has a central opening at the top and smaller perforations on either side of it. What is this vessel called?

7. Finally, a tongue-in-cheek entry to the quiz in the form of humorous “revenge art”. This vessel was made in the likeness of Sir Harry Parkes, a British diplomat who was abhorred in China for his role in instigating the Second Opium War. What purpose did this vessel have that inspired the Shiwan potters to model it after Sir Harry as an insult?

1. Water-dropper: used to contain water from which tiny amounts of water can be poured as droplets from the spout onto an inkstone to dilute the ink to desired consistency for calligraphy or ink-painting.

3. It is not yet clear what the jue was used for. Scholars refer to it as a ritual wine cup. It may have contained wine as part of a ritual, but it’s unlikely that wine was actually drunk from it, as it would be physiologically impossible to drink from it without poking one’s eyes out on the posts on either side of the spout!

4. Before it was re-made into a salt/pepper container, the small jade cylinder was an archer’s ring or a thumb ring.

5. It is a vomit pot for seasick wayfarers.

6. It is a flower brick vase. The central opening allows water to be poured in, while the small holes are where you would insert the flower stems.